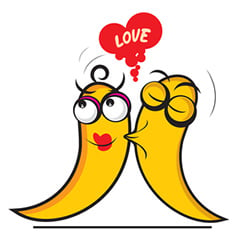 One key to red worms’ reputation as superb composting worms is their ability to reproduce. A composting bin stocked with a couple of pounds of red worms can go a very long time without needing more worms added. If the worms are properly fed and cared for, they will make baby worms. What is the red worm’s reproductive cycle? Under what conditions will red worms reproduce?

Red worms are hermaphrodites. They have reproductive organs that are both male and female. However, red worms cannot reproduce on their own. Jellyfish, flatworms, sea anemones, certain types of sharks, boa constrictors, certain insects, some rare reptiles, and chickens and turkeys are capable of reproduction without a mate. Worms need other worms to make babies.

Maybe you have noticed that some red worms have a ring around their bodies. This is a bulbous gland called the clitellum and it contains the reproductive organs. When they are ready to reproduce, the clitellum becomes visible and turns orange.

During the mating process, the worms join together. They secrete mucus from the gland, creating a ring of mucus around them. A few hours later, the worms separate.

Having exchanged genetic material with the other worm, each worm lays eggs in a cocoon that is wrapped around their body. Then, it wiggles out of the cocoon, sealing it. The cocoon is laid near the surface of the bedding. The oval-shaped cocoon hardens, keeping the eggs inside safe. The cocoon is quite hardy and can last up to a year in a wide range of temperatures — even freezing — and various moisture levels.

When the conditions are right, the cocoons hatch — usually in two to three weeks. Tiny baby worms emerge. There are at least three baby worms per cocoon. They are ready to start eating organic material.

At the age of two to three months, these new worms are old enough to reproduce. Then, the worm reproductive cycle is complete.

Mature worms can produce two cocoons per week under ideal conditions. In theory, their population can double every three months. However, in the confines of the composting bin, the worm population will balance itself. If you see worms attempting to escape en masse, see our article, “Why are my composting worms trying to escape?”

Keeping Your Worms Happy and Breeding

Throughout their lifetime, red worms are voracious eaters. Even hatchlings are ready to start munching on kitchen scraps and unwanted vegetation. They turn this waste into a nutrient-rich organic fertilizer. The resulting fertilizer, called humus, is perfect for gardening. Just add it to potting soil, dig it into the earth, or spray on some worm tea.

At Uncle Jim’s Worm Farm, we strive to provide the best-quality red composting worms, as well as Super Reds for composting or for releasing into your garden or yard. We also have plenty of worm information in our blog. Additionally, we carry a selection of excellent indoor composters and our own worm kits. Folks who want to skip the composting process can purchase Uncle Jim’s organic fertilizer, which goes straight into your garden or potted plants. Our farm also produces meal worms for pet food, fishing and science projects.

2 comments on “Reproductive Cycle of a Composting Red Worm?”