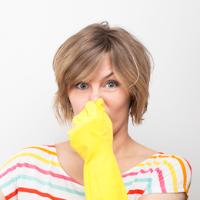 Everyone loves a productive vermicomposting bin, but no one wants to smell it. At Uncle Jim’s Worm Farm, we want composting with worms to be a pleasant experience. Making free compost out of kitchen scraps and unwanted vegetation is great for gardeners. And it’s better for the environment. You can keep your environment comfortable by reducing worm bin odors.

If you have an outdoor vermicomposting bin, odor might not be too much of a concern. Unless it’s located upwind of your patio, fire pit or swimming pool, you don’t need to go crazy over a little whiff of rotting vegetation. However, a worm bin that could stun a buffalo at 20 paces is a sign that something is amiss. To keep your worms healthy, follow the trouble-shooting steps below.

For indoor worm bins, heading off odor is primary. If housemates, guests or family members start complaining about a “weird smell” when they walk in the door, your worm bin has problems. It is especially crucial to bury the scraps in indoor bins. Also keep the size of scraps small – cut them up or use a food processor, food chopper or blender. And don’t add foods that cause odors. Got odors? Follow the troubleshooting steps:

1. Are you adding too much food?

If you see a large amount of undigested scraps in the bin, you might be adding too much food, too quickly. Remove some of the food. You can freeze it or throw it away, or cut it up smaller.  The worms should be able to work their way through a specific lump of scraps within a week or two. You can guesstimate how much to feed by burying scraps in one corner. A few days later, check and make sure the worms are starting to work on the corner feeding.  If you see a good number of worms munching away on those scraps, and the food is breaking down, add another set of scraps right next to it. Work your way gradually around the bin. By the time you get back to the original feeding spot, the scraps should have been converted into “black gold.” Keep feeding like this until you see indications that it’s time to harvest or add a fresh tray (for tray-based systems).

Note: Using a food processor or blender to make gourmet slurry for the composting worms can backfire if you add too much water. Excess water can unintentionally create moisture problems (see #3 below).

2. Are you trying to compost the wrong type of food?

If you have added meat, dairy products, oils, or fats, they will go rancid and stink up the worm bin. Vegetation that is famous for odor are banana peels and cruciferous vegetables, such a broccoli and cabbage. If you must add them, cut into small pieces and add sparingly. Anything that specifically seems to make your bin smell bad should be avoided.

Acid foods can throw off the pH in a bin.  Avoid excessive tomatoes, pineapples and citrus scraps.

A too-wet worm bin might start to smell. Too much moisture is also bad for worms, who breathe through their skins and can drown in wet soil. Aim for bedding that is about as wet as a wrung-out sponge. The texture should be crumbly.

Wet bins get clogged drain holes and then the problems really start! If drain holes aren’t open, clear them of any mud and debris.

If you have any standing water in the bin, soak it up with paper towels, then throw out the towels. (Removing the lid, shining a light to prevent escapees, and blowing a fan over the bedding had an effect on the top of a wet bin, but it didn’t cause any miracles).

Adding dry bedding, such as shredded newspaper or pure peat moss, will soak up the moisture and restore balance. Gently mix it in.