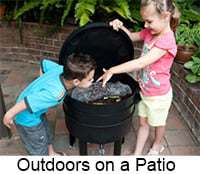 A common question we get at Uncle Jim’s Worm Farm is, “Where should I put my composter?” Part of your composting success depends on its location. Let’s take a look at the best places to put your vermicomposter.

The first decision you need to make is whether you want to compost outdoors or indoors. Some folks leave their composting worms outside year-round. Others choose to compost outdoors during the warm months of the year and move operations indoors in the cold winter. And some — especially urban dwellers — go for small-scale indoor composting.

Start by looking at the volume of scraps you plan to compost. Large-scale operations for an entire apartment building, restaurant, or neighborhood may need the help of an engineer to find a perfect location. Most homeowners produce a modest amount of kitchen scraps, plus vegetation from gardening, which can be handled by a composting bin ranging from 5 to 30 gallons in volume. Odor from indoor composting is more noticeable, so matching the volume of scraps to the productivity of your composting bin is especially important. In a pinch, extra scraps can be frozen, discarded, or thrown into an outdoor compost pile.

Remember that the worm bin needs to be accessible, so that you can add scraps easily. You can place it on the path between your door and your vehicle, just outside the back door, in the garage, or right in the kitchen. If the bin is too difficult to reach, your composting program can lose momentum and fizzle out. If you dread trekking out to the composter, keep scraps in the refrigerator or freezer until you get around to it. 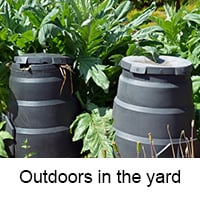 If you decide that outdoors is the right place for most or all of your composting, look around your property.

Some worm bins are huge and, when full of compost, are too heavy to move. Some are made of wood or chicken wire and cannot be moved. Think about whether you might want to move the bin to a more sheltered location in the winter. If you can empty the bin of enough finished compost, it might be light enough to move. Or, leave it in place and move some of the worms to a separate indoor bin when the weather gets cold. Some composting fans prefer to insulate their outdoor worm bin and hope that worm eggs will hatch in the spring to replace the ones that freeze. 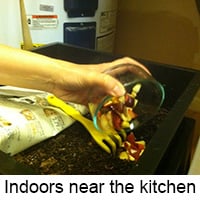 It’s not too hard to find a discreet place to set up an indoor composter. The basement or semi-heated garage can take a composter of any size. Smaller composters tuck easily into a closet. And fashionable, plastic tray-based composters look great in the kitchen or in a kitchen cabinet. Uncle Jim’s carries several small composters that are ideal indoors or out (such as the Worm Factory 360, the Worm Cafe and the Can-O-Worms). They keep the same footprint on the ground, but you can add trays to build up. Also, you can make space by harvesting extra compost and setting it aside until you need it.

If you decide to compost indoors, see our tips for preventing odors and problems with your indoor composter.

There is a wide variety of composters available, or you can make your own worm bin. Put it in a convenient location that is also sheltered from the elements. Your worms will generate fabulous compost for your garden, and you will reduce waste.

If you need worms for your composting project, order the Red Composting Worm Mix from Uncle Jim’s Worm Farm. We have been selling worms for more than 30 years.