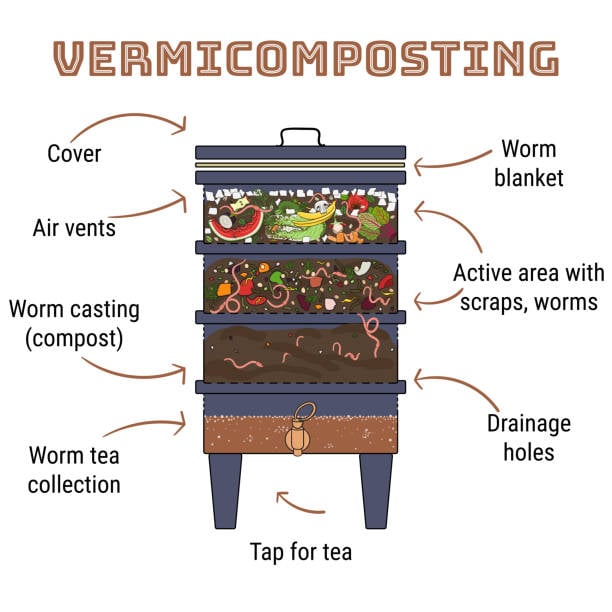 We all want to do our part to recycle and be more environmentally conscious, but have you ever considered doing more than just sorting your trash? Kitchen scraps and other organic materials you would ordinarily consider waste can be put to good use in a worm farm! A Worm Farm DIY project is not a complex thing to build; all you really need are worm bins, food scraps, vermicomposting worms (preferably red wiggler worms), and worm bin bedding.

You will end up with worm castings, which you can make into worm tea or worm juice that will help create healthy soil to grow produce on. Creating fertilizer through worms in your own backyard is a win for you and the environment.

What is a Worm Bin?

Worm bins, also known as worm composters, are containers with holes for ventilation and moisture. These are made from materials that do not have antimicrobial properties to allow microorganisms to grow. You can even make your own worm bin with materials you have lying around in the house. 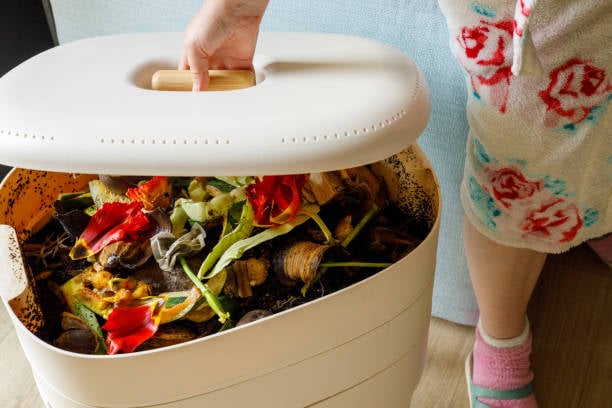 Indoor worm composting is preferred by those who want to save space or for people who do not really produce a lot of kitchen waste. Indoor composters can be placed anywhere in the house, including the garage, the kitchen sink, and even the laundry room. The best part about making your own worm bin is you can customize it to fit the space you have in mind.

Indoor worm bins are easier to maintain in terms of temperature control because they are not exposed to the elements like outdoor worm bins are. However, they must be cleaned more frequently to avoid unpleasant odors. 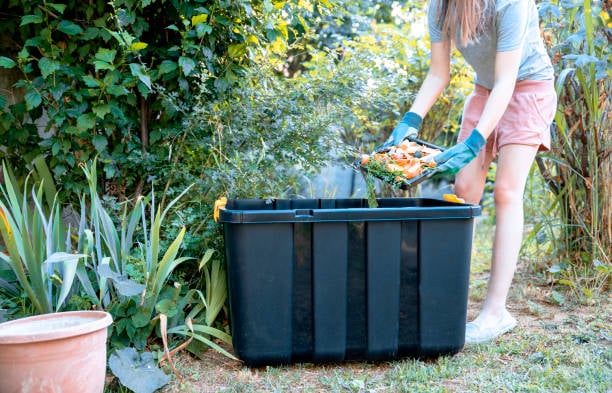 Outdoor vermicomposting is ideal for people who have a yard or extra space because outdoor worm bins are typically larger in size and can compost more organic waste than indoor worm bins. These composters, in general, necessitate more upkeep. They need to be kept out of direct sunlight as much as possible to avoid drying out the bin and killing all the worms.

Outdoor worm bins are also more likely to have worms escape into the garden soil, so make sure to feed your worms at regular intervals to avoid this. Because an outdoor worm bin is exposed to the elements, its temperature can fluctuate more often, so keep an eye on the moisture levels to ensure it isn’t too dry or too wet.

Want to start worm composting but not sure how? Order Uncle Jim’s worm bin kit so you can start on your vermicomposting journey!

DIY Worm Compost Bin – How To Actually Do It

Starting your vermicomposting journey is an excellent way to save money on trash disposal and harvest worm castings for improved soil health but some people are put off by the prices of some worm composting bins or find that they are too large and bulky for the space intended.

While worm bins sold online or in hardware stores work well, we are here to tell you that there is another option, especially if you are on a tight budget. You can make your own worm bin that will save you both money and space!

In this section, we will talk about what materials you can use as well as how to make a worm bin. You can repurpose containers you might already have at home or purchase an inexpensive worm bin option from us! 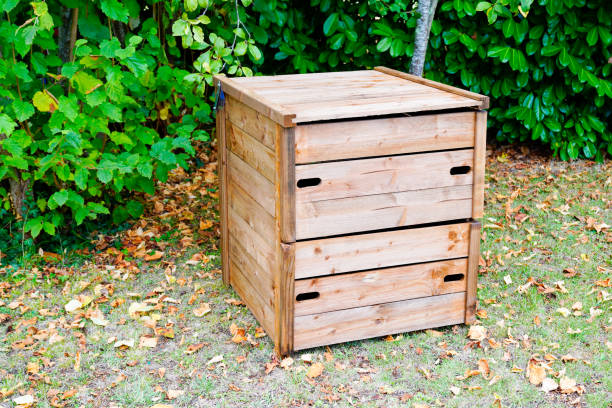 Gallons, tubs, or any other storage container that isn’t being used in the house can serve as your worm bin as long as they aren’t too deep. Choose something that is broad but shallow since worms, particularly red wigglers, love to live on the top 3 inches of the worm bed.

Worms dislike light, so it is best to use black or solid-colored ones. If you use white opaque bins, try to cover them with burlap to protect the worms from direct sunlight. You can even use wood, as long as it is not pressure-treated lumber, which tends to leach arsenic and is not good for worm and soil health.

For this DIY project, you have two options. First is to have a top bin and a bottom bin, which you will stack on top of each other to form a tray system. The top bin is where you put your bedding, food scraps, and other worm-related items. The bottom bin is for drainage so moisture levels in the worm bin can be maintained.

The second option is to use only one bin but place it on top of a few bricks or pieces of wood. This drains the excess liquid so your worm bin does not become too wet.

Whether you use one or two bins, you will need to drill holes in one of them. Get a power drill (this will make the task a lot easier and save you time) to make about 10 holes on the bin’s base (for drainage) and a few more on the bin’s sides/walls near the top (these will serve as ventilation holes). Make bigger holes at the bottom because you need them for drainage purposes. 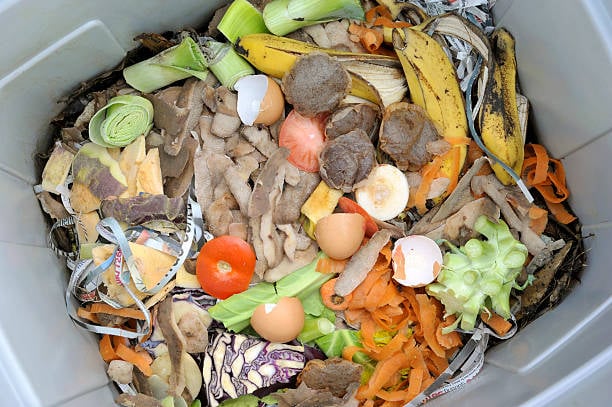 Begin filling the bin with newspaper shreds, dried leaves, and soil (the bin content should fill at least 1/8 to 1/2 of the bin). Then, mix your organic scraps (like fruit and vegetable peels, crushed eggshells, coffee grounds, yard wastes, and so on) with some soil. Finally, spray or sprinkle some water on the bedding, it should only be the consistency of a wrung out sponge.

To test out the moisture level, take a handful of the bedding and squeeze it, only droplets should come out. Make sure you have a regular feeding schedule, maintain both moisture and pH levels, and you’re good to go!

Things to Look Out for in a Worm Bin 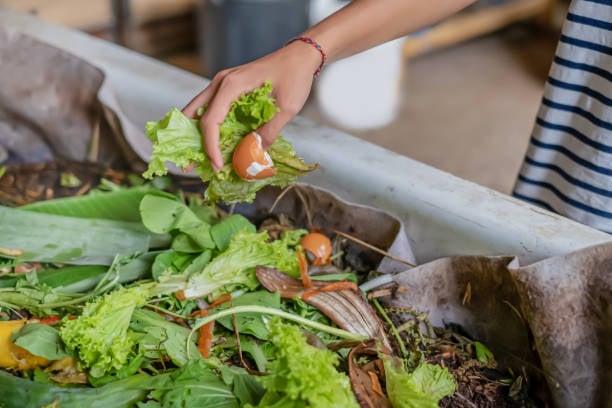 A worm bin, even a DIY worm composting bin, needs certain qualities in order to be the perfect home for your compost worms. Here is a list of those characteristics, so you can check if your own worm bin matches up.

The worm bin material you choose should not kill bacteria and other microorganisms because they make up roughly 80% of finished compost. These organisms speed up the process by breaking down the scraps, making it easier for the worms to eat and produce worm castings faster.

Most people who are just starting out do not know two things:

If you choose a worm bin with antimicrobial properties, you are taking away a food source from your worms and slowing down the whole process of vermicomposting.

When you have a worm bin, you need to make sure there is proper ventilation and the excess water is drained. Worms do not breathe through their mouths or noses like people do. Instead, they breathe through their skin. Because of this, it is important for the top and sides of the worm bin to have enough holes and ensure aeration in the worm bedding.

You will also have to keep an eye on how much water is in your worm bin. Worm castings and worm tea can only be of good quality if they have the right amount of moisture. If there is too much moisture, the castings will be watered down; and if there is not enough moisture, the worms will not be able to make any castings at all.

Some people might overlook this detail, but where you put your worm composter is also a big part of everything coming together and working out. Whether you opt to put it inside or outside, the worm bin needs to be accessible. For indoor spaces, you can easily tuck it under the sink or place it in the garage or basement.

But for outdoor worm bins, there are more things to look out for. Here are some tips from the team at Uncle Jim’s: 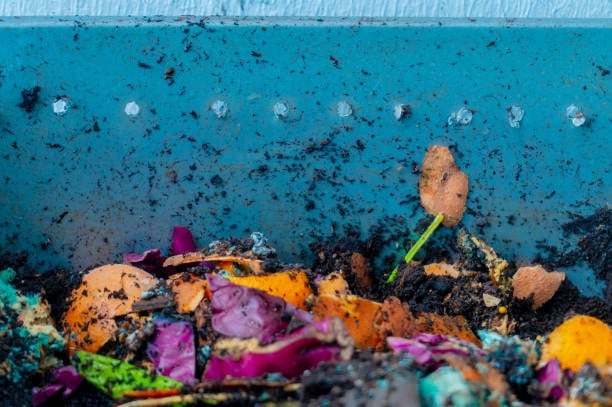 What materials are best to use to create a good worm bed?

Worms require fresh bedding to produce worm castings; and with so much conflicting information on the internet about what materials to use for worm bedding, it can be confusing. It is important for bedding to be pH neutral, free of abrasive objects, able to retain the required moisture level and allow oxygen to flow.

You can use peat moss, wood chips, grass clippings, or shredded paper. If you want a more in-depth guide, let the team at Uncle Jim’s tell you how to build a worm bed the right way.

Can I use any food scraps as worm food?

No, like humans, worms need a specific diet in order to do their jobs. Stay away from salty or citrus food scraps since they will cause an imbalance in pH levels. Meat and dairy products are also hard for worms to process and might cause complications.

We recommend leafy greens, egg shells, tea bags, coffee grounds, and even animal manure (although not from a cat or dog). The right worm food will allow your worms to thrive and produce the highly sought-after worm castings.

How big should my worm bin be?

That depends on the kitchen waste you generate. It is best if you wait a few days to see how much waste your household produces, so you can avoid using a second bucket in case your first worm bin is too small. A family of two typically produces half a pound of food waste so the surface area of your worm bin should at least be 4 feet.

A family of four will generate double the amount, so the size of your worm bin should be adjusted accordingly. Keep in mind that your bin doesn’t have to be deep because worms thrive in the top layer, especially red wigglers.


Each material has its own set of advantages and disadvantages. Wood is a natural material that can be cut to any size. It is ideal because it allows for good aeration;  but it can dry out if it gets too hot and you don’t move it. The wood also deteriorates over time, making it difficult to move.

A plastic tote or bin is a more durable and space-efficient option because there are options for stacking them. They retain moisture well and are easier to clean; but a plastic worm bin must be drained more frequently than a wood worm bin because it retains moisture more than wood.

Find all the worm composting information you need to know from our team at Uncle Jim’s Worm Farm! Whether your building your first do-it-yourself worm bin or if you have any worm composting questions, we got you covered!