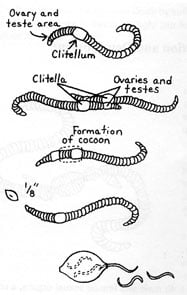 Healthy composting systems are home to some of the most prolific breeders around: the Red Wiggler. Knowing a little bit about how they mate and what the ideal mating environment is like will help you harvest more compost.

Did you know that under favorable conditions, mature red worms can produce two to three cocoons per week? That’s a lot of baby worms, considering each cocoon will yield anywhere from 3-20 juvenile worms! If you want long-lasting sustainability, it’s important to keep your red wigglers comfortable and happy to encourage more reproduction.
Let’s dive into how worms reproduce and what that can do for your vermicomposting system.

Most people already know that worms are hermaphrodites. This means that they have both male and female reproductive organs. However, they cannot reproduce alone. They must pair with another worm for successful reproduction to occur.
When two worms mate, they join and begin secreting mucus to create a mucus ring around them. After a few hours the worms separate and lay eggs and fertilize the inside of the cocoon. The worms back out of the cocoon and it seals itself off, leaving an oval-shaped cocoon that hardens over time to protect the young hatchlings inside. After 11 weeks, the hatchlings emerge from the cocoon!
Worms can’t reproduce just any time. Their bodies undergo changes as they grow older, and at around 90 days old they become old enough to mate.
When a red worm reaches maturity, a bulbous gland appears about 1/3 of the way down its body. You have probably seen this on an earthworm or nightcrawler. This gland plays an important role in the mating process as it produces the mucus needed for cocoon production.
One important thing to take note of is that the larger the worms are, the more often they mate and the more hatchlings their cocoons will produce. Ensuring that your worms enjoy a proper diet will help them grow healthy and strong.
One of the most enjoyable parts about vermicomposting is the self-sustaining element of it. Since worms reproduce so much, you’ll never run out of worms in a healthy environment. It’s not uncommon for someone to buy an initial batch of red wigglers and never have to buy worms again for composting purposes.
There’s conflicting opinions over the life expectancy of worms, but you can expect to get at least 5 years of use out of a worm before they no longer reproduce. Earthworms are known to live 10-15 years before they die, which is why we always suggest helping a worm find its way back into moist soil when you see one stranded on a walkway, road, driveway or another dangerous environment!
Without going into too much detail, we hope that was informative for you and that it will help you harvest more valuable compost from more worms! Just remember, the healthier your worms, the more they’ll reproduce. And the more worms you have, the more castings you’ll harvest!
Uncle Jim’s Worm Farm is a global vermicomposting company specializing in red wigglers and worm composting products. The above image is not our own.