Blog / Why are My Composting Worms Trying to Escape? 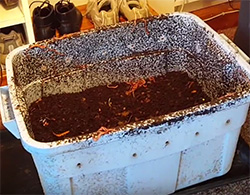 Worms in a vermicomposting bin sometimes try to escape. If it’s just one or two adventurous worms, you don’t have much to worry about. However, if you see worms clumping near the top of the bin, at the air ducts, or climbing out, something may be amiss. Let’s find out why composting worms try to escape, and what you can do about it.

Note: Worms are sensitive to the weather. If a low pressure system or thunderstorm is moving in, the worms might start clumping and climbing. Watch for a while and see if this is the pattern. If so, do not worry.

Worms breathe through their skins. If they don’t have enough air, they will try to leave the bin. Lack of oxygen could be caused by:

To check for overfeeding, dig around. Is there a lot of undigested food in the bin? You can take some out. Wait until they have worked through most of the food in the bin before adding more. If you have excess scraps, you can freeze them until later.

Your worm bin should have a lid. Keeping the lid on discourages escapees.

A poorly designed bin might not have good drainage. Maybe it doesn’t have enough air holes, or the holes are blocked. We’ve even seen shallow home-made worm bins set right out in the open with no lid and of course, the worms made a break for it! Build a solid bin yourself, or try one of our tray-based composters.

Any compost bin can get its air holes clogged with debris or objects surrounding it. Check for this and open up the air passages.

When introducing worms to the bin, place them on top of the bedding. Let them dig their own way in. They build little tunnels that provide oxygen. Dumping lots of bedding directly on worms can smother them.

If the bin is too wet, your worms will start to drown. They may try to crawl away from the danger. This is also bad for composting and can stink up the bin. Excess mold and even mildew can grow. Yuck!

The worm bedding should have the consistency of a wrung-out sponge. Squeeze some bedding in your hand to check. If water comes out, your bin is too wet.

The cure for a wet bin is to add dry bedding. Shredded newspaper is perfect; so is peat moss, coconut coir and shredded cardboard. Add and stir gently.

To help prevent moisture problems, keep the lid on, especially when it rains. Don’t add too much wet, sloppy foods like melon or left-over fruit smoothies.

If the bin is wet beyond repair, you might need to harvest your worm castings (fertilizer), isolate your worms from most of their bedding, and start over with fresh bedding. (See an article about isolating the worms)

If you like detective work, look at any recent change you’ve made that might be causing the problem. New environment? New bedding? New foods? If possible, reverse the recent change and see if the worms go back to normal.

Sometimes people forget to feed their worms. Starvation will drive the worms to greener pastures. When you go on vacation, save up scraps in the fridge or freezer. Ask a friend to feed the worms twice a week or so. Maybe you’re eating out a lot and aren’t generating any kitchen scraps. Enlist a neighbor to save their kitchen scraps for you, and save left-over salads (wash off the dressing). Keep the worms fed until you’re back in the kitchen.

Adjust the pH of the Worm Bin

Most compost owners don’t need to go to the trouble of actually measuring the pH of their worm bin. If you have a pH probe handy, measure it and aim for neutral pH of 7. Adding some crushed eggshells helps lower the pH and adds grit that helps the worm digest the food. Acidic, oily or salty foods like potato chips and large amounts of tomatoes can throw off the pH.

When the worms reproduce, hundreds or even thousands of baby worms hatch. The adults might feel crowded and try to leave. You can just ignore the problem and the population will balance itself. Or, scoop up the “volunteers” who are hanging around the sides and top of the bin, and start a new bin. Maybe a friend would like to start composting and would LOVE a bucketful of worms for her birthday. Red composting worms are also great to use as fishing bait.

Quick Fix: Turn On a Light

Maybe your worms charge at the lid every time you try to feed them. If you’re trying some of the ideas above, you can keep the worms under your thumb by simply turning on a light. This video demonstrates that light starts working immediately. The 3-minute video also has some reasons why your worms might be escaping.

Video – How to Stop Worms from Escaping the Compost Bin

You can also put a little dry bedding on the top. This will discourage them from climbing up. Take care not to suffocate them.

Your worms might be sick. Here is a more detailed article about worm health.

If worms escaping is really a problem, making adjustments to your worm bin should help. At Uncle Jim’s Worm Farm, we have been cultivating worms for more than 40 years, and we grow our own Red Worm Composting Mix. We also carry a line of tray-based composters, perfect indoors or out. And we grow Super Reds for releasing into the garden, plus mealworms for bird food, pet food and fishing.

37 comments on “Why are My Composting Worms Trying to Escape?”