Blog / Vermicomposting: How to Compost with Worms 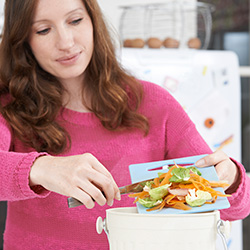 Composting kitchen and garden scraps using worms is faster than without worms. Adding a bag of composting worms results in richer compost. This dark compost is treasured by gardeners because it contains soil nutrients and living bacteria. Composting with worms is called “vermicomposting.” Vermicomposting is easy, and it’s a fun hobby too! Children and adults embrace their wiggly helpers as working pets. Vermicomposting is also great for the environment. Instead of tossing out scraps vegetation, you create free fertilizer. Let’s find out the benefits of vermicomposting, and how to get started.

Why Compost with Worms

Modern householders of all types can harness this natural process via vermicomposting. Starting a composting bin or pile concentrates the composting process into one small area. Composting with worms can be done outdoors on a large tract of land, in a suburban neighborhood, on an apartment patio, or indoors.

Main reasons for composting with worms are:

How to Start a Composting Bin

Starting a Vermicomposting bin is easier than it sounds. In just six steps, you will be composting. Many millions of households have succeeded at vermicomposting, and you can too!

How to Feed the Worms

To feed the worms, use vegetable, fruit, and grain scraps from your kitchen. Avoid meat, dairy, and oily foods. Avoid acidic foods like pineapple, large amounts of tomato, and citrus fruits.

Dig a hole in one corner of the bin. Bury a cup or so of food there. After a few days, the worms will have started on this feeding. Dig a hole next to it and add the next feeding. Work your way around the outer edge of the bin. By the time you get back to the starting point, the original feeding will gone. You can cut up the food or use a food processor to speed up the composting process.

Trash stinks because left-over food breaks down in an airless trash bag or bin. Without enough oxygen, malodorous bacteria grow. On the other hand, the composting bin has plenty of air flow. Put scrap food into organic bedding and the worms eat it quickly.

Your bin may run into trouble. Odor and pests can create a nuisance. The worms sometimes get sick or die. Sometimes they try to escape.

After some months, you can harvest finished compost from your bin. Use the fertilizer on your starts, plants and garden.

Vermicomposting is fun and easy. Once you try it, you will be delighted with the results! You will cut down on household waste. And you will get free organic fertilizer for the garden. Start your worm bin today!