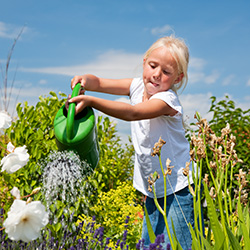 Many composting enthusiasts worry about their composting worms dying in the summer heat. This is a rational fear. The worms are trapped in an enclosed bin, at the sun’s mercy. However, there are several easy ways to protect the worms from the heat.

It’s Not Just the Heat

The main problem with warm weather is not directly the heat. The primary problem is dryness. Worms breathe through their skin. If their skin dries out, they suffocate and die. Composting worms must remain moist. A worm laid out in the direct sun can die of suffocation in just three minutes.

Worms get their moisture from their bedding. Heat causes evaporation. When the bedding gets dry, the worms cannot breathe as well. They may try to reach moister parts of the bin, such as the bottom.

Your primary defense against dryness is keeping the bin out of the sun. Find a shady spot. Under an awning, carport, or shed roof is ideal. Trees or large bushes may provide adequate shade. If the area has a breeze, so much the better.

Cover the Worm Bin and Bedding

Most types of worm bins can be covered. Keep the lid on to retain moisture.

Note: If rain enters your bin, the bin might become too wet. Protect from rain by keeping the lid on. If the lid is leaky, put the bin under shelter.

The worm bin bedding should have the consistency of a wrung-out sponge. Squeeze it in your hand to find out.

If the bin is too dry, add a little water. Use a hose or sprinkler. Don’t over-do this or your worms will drown. Add a small amount of water at a time. Stir gently, if needed. After a few minutes, test the moisture again.

If you are using a worm blanket, moisten it occasionally. Newspaper should be kept damp. Replace the covering if it breaks down.

If your bin is shallow, add more bedding. You can add moistened coconut coir, composted leaves, shredded black print newspaper, or pure peat moss for example. Deeper bedding gives the worms somewhere to retreat when the top is too hot.

Too busy to deal with worm bin moisture? Put kitchen scraps in a plastic container, add water, and place in the freezer. Wait until the scrap-sicle is frozen solid. Pop the icy treat out of the container. Dig a hole in the center of the worm bin and bury the frozen scrap-sicle. The temperature will go down when the water starts to melt. And the food will be available to the worms.

Worms have evolved to survive the summer. In the confines of a worm bin, though, extra care is needed. Set your worms up for a cool summer! Vermicomposting worms convert kitchen and garden scraps into valuable compost.

The best worms for composting are Red Worms. European Night Crawlers — also called “Super Reds” — can be used for composting, but they are best released into the garden or lawn for aeration and fertilizing. Uncle Jim’s Worm Farm produces composting worms, plus accessories such composters.

12 comments on “How to Compost with Worms in the Summer”