Blog / How to Harvest Your Compost 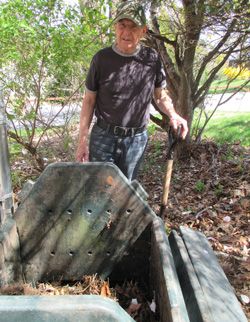 You have been faithfully adding organic matter to your compost bin, and now it’s time to reap the harvest! In the spring and summer, your plants need lots of organic fertilizer to grow strong. Maintaining a composting bin or pile is the best way to make your own organic fertilizer at home. When you are getting ready to plant, or need to nourish an existing garden, turning your compost bin gives you access to the compost.

Most of our customers use worms to help break down the compost. Our Red Wigglers are champion composting worms that often lay eggs to continue the population; Super Reds (European Night Crawlers) are superior for releasing into the garden or for living and reproducing in a vermicomposting bin that gets exposed to temperature extremes. Certain composters for red wigglers are suitable for indoor composting, but most composting systems are outdoors — or indoors in the winter and outdoors in the summer.

Note: We carry a Compost Pile Turner that is great for aerating and maintaining a healthy composting system. However, it’s designed to be use a couple of times a month, not at harvest time.

How you harvest your compost depends mostly on the type of composting system you have. The more basic the composting bin, the more work it will be to harvest the compost without removing a lot of worms.

The tray-based composter is the easiest to harvest from. An example is the Worm Factory 360, which is a best-selling item at Uncle Jim’s. You should have been feeding only in the top tray. The lower trays should be full of rich, dark composted matter and very few worms. So, remove the lowest trays. Sort and screen out any undigested organic matter (see “Processing” below). If a couple of stray worms make it into your final product, don’t worry too much. You can either pick them out and put them in the top tray, or just leave them. These stragglers will be happy as free-range worms.

Some composters have a drawer at the bottom. Follow manufacturer directions to remove compost from this drawer. The undigested organic matter – and most of the worms – will be in the top of the composter, and the finished compost will be in the drawer. Sort, screen and apply the compost to your plants (see “Processing” below).

Tumblers let you roll the bin or crank a handle to turn it. Depending on the type, many owners turn the compost a couple of times a week. This means the compost, worms and finished compost will be evenly distributed. You should stop adding scraps to the composter in the couple of weeks before you want to harvest the compost. This will give the organic matter a chance to break down. Scoop out your finished compost and sift through it before applying it to your plants.

A large, deep plastic tote, plastic barrel or composting bin – fancy or plain – needs to be “turned” to find the decomposed compost on the bottom.

The exception is if there is less than half a foot of black gold, organic matter and worms in a tote composter (such as the Worm Friendly Habitat). You might get away with relocating your worms to one corner of the bin. Simply feed them in one place for a while and most of them should migrate to that spot. Then you can harvest from the other parts of the tote. However, if your worms won’t cooperate, you’ll have to turn it.

The deep bin or compost pile needs to be “turned”. Under the rotting material on top is fully composted humus, perfect for gardening. Get your pitchfork and follow along:

The finished compost (Part B) might have sticks, fruit pits, rocks, large seeds, produce stickers, partial avocado skins, tea bag tabs, etc. It’s a best practice to remove most of these items, if possible, before using the compost on your fruits and veggies. They can act as barriers to plants sprouting and can introduce problems if they take root.

Some gardeners choose to buy or build a screen to run the compost through. See our post about screening compost. This will also remove some of the stray worms, which you can reintroduce into the compost bin.

You can also sort out the compost by hand.

Dig the black gold into on your garden, mix with other ingredients for seedlings, or make compost tea.

If your vermicomposting system doesn’t have many worms in it, you could wait a bit and see if they bounce back. Sometimes there are enough eggs to rebuild the population. If you want to quickly boost your composting worm population, just order worms from Uncle Jim’s Worm Farm.

No matter how you manage your compost, know this: You are making a good decision to turn garbage into black gold. This free fertilizer makes your plants happy and strong, and it helps save the earth, too!

2 comments on “How to Harvest Your Compost”