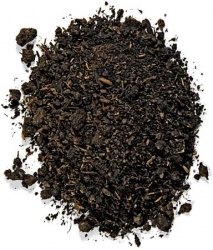 Worm castings is just a fancy way of saying worm poop. Uncle Jim’s Worm Farm likes to refer to it as “black gold”, because it really is priceless stuff. Organic black gold produced by red wigglers outperforms chemical fertilization every time. Not only is it priceless, but it is also profitable! It is so valuable and nutritional for gardening and crop growing that you can find people to buy from you fairly easily.

Why It Works So Well

First, black gold, when done right, does not stink. So don’t be afraid to get your hands right in it. The reason it doesn’t stink is because it has been reprocessed by the worms multiple times, being broken down into stable or neutral states.
The reason our “black gold” works so well because it greatly enhances soil fertility. In turn, it enables plants to absorb more nutrients in the soil, growing faster and healthier than they would with normal top soil. If you want to grow that monster pumpkin or those sizable cucumbers, using organic fertilizer will help you more than anything else.
Throughout the life of a plant, it goes through many phases. One of these phases is chemical synthesis. Plants, just like humans, need nutrients in order to summon the energy to complete cycles. Worm castings operate like a pit crew during a NASCAR race.
Red wigglers are some of the best known vermicomposters. They do all the hard work of eating and digesting your discarded food scraps and other appropriate waste. All you have to do is gather up the remains, separate worms you wish to keep and apply it to your garden! Worm castings can be applied at any time during the crop season. Even the tiniest seedlings will be fully accepting of it!
Perhaps the very best nutrients that come out of worm castings are calcium, nitrogen, phosphorus and potash in which several times more of it exists than in ordinary top soil.

Worm castings are not only great for gardening, but it’s the best imaginable potting soil for plants in general. You can also spread it over crops if you are a farmer or apply it specifically to shrubs and young trees.
If you haven’t yet tried vermicomposting, give it a try. It’s the absolute best form of fertilization, it’s a fun hobby and you’ll have a beautiful garden to show your friends and family.
Let us know how “black gold” has enriched your garden or plants by leaving a comment!