Blog / Grow Your Own Live Worms for Fishing Bait 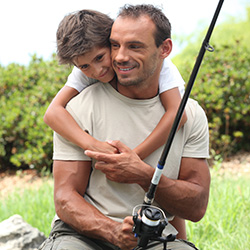 Are you a live worm fishing enthusiast and want to raise your own bait? You can easily grow fishing worms at home. In fact, you can solve another problem at the same time: household trash odor. Fishing worms can eat your kitchen scraps. No more holding your nose on trash day! Composting worms are easy to set up and maintain. A worm bin offers a ready supply of juicy, fresh worms. They renew themselves, so you don’t have to run to the bait shop anymore. Save money, save time, and save trash hassles!

How to Set Up a Composting Worm Bin

Start by looking around for a location. Worms are just like you: they like moderate temperatures. If you want to keep them outdoors, choose a shady spot under shelter.

If you love ice fishing in the winter, keep your worm bin in a warmer spot, such as the basement, the garage, or in a kitchen cabinet or closet. Active, warm worms will be easier to scoop up when you want to hit the fish house.

Types of Worms for Composting

Looking to catch smaller fish? The Red Worm makes a tasty meal for most smaller edible types of fish. They are also champion composting worms. You can order our Red Composting Worm Mix from our website.

Most anglers will want to raise European Night Crawlers, also called “Super Reds.” Their large size makes them easy to dig out of the worm bin. They are also simple to place on the hook. Super Reds should be raised in a deep bin, such as a plastic tote. Uncle Jim’s Worm Farm offers the Worm Ranch Kit to get you started. Or you can make your own worm bin by following the instructions in this video.

A basic composting bin has drainage holes, air holes, and a lid. If you decide to use Red Worms, order a tray-based composter from Uncle Jim’s. They are easy to tend and harvest.

How to Set Up Your Worm Bin

All our worm bins come with instructions. Just follow along. If you are making your own, check out our instructions for setting up a worm bin. You will need bedding if you make your own bin – see our bedding tips.

When your worms arrive, open the bag and place them gently on top of the bedding. They will dig their way down. They will dig down faster if exposed to light. After they disappear, keep the lid on, except when you are tending to them.

You need to feed them two to four times a week. Save your compostable kitchen scraps in a container. For example, carrot tops, potato peelings, left-over vegetables, most fruits and fruit rinds, and used coffee grounds make great worm food. Cut the food up small and bury it.

How to Get Worms Out

If you are keeping the lid on, some of your worms will be hanging out near the surface of the bedding. Get your bait cup handy, and open the worm bin’s lid. If you move quickly, you can scoop out several handfuls of worms. Failing that, dig around gently with a tool. They will be attracted to food, so look in the spot where you last fed them.
Off you go! Happy fishing!

Your worm bin will probably produce far more worms than you could ever use for fishing. That’s OK – the worm bin is also recycling your kitchen scraps. The worm bin will start to fill up with a dark, fluffy substance that looks a bit like dirt. However, it is not dirt. These are worm castings, also called worm poop. Anyone who gardens will love this stuff! It’s a perfect organic fertilizer for plants.

Two to four times a year, harvest the worm castings. Even if you don’t need it, one of your neighbors or co-workers would appreciate it. Or sprinkle it under the bushes in the yard. By harvesting, you prevent compaction in the bin and keep the air and moisture flowing. Harvesting also lightens the weight of the bin.

Note: Some fishing enthusiasts swear by mealworms. We offer both live and freeze-dried mealworms, shipped anywhere in the continental United States. Mealworms need a different type of bin if you want to cultivate them.

6 comments on “Grow Your Own Live Worms for Fishing Bait”