Blog / How to Vermicompost with Nightcrawler worms 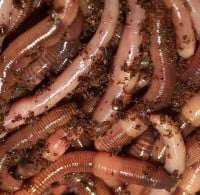 Well, vermicomposting is actually a natural form of recycling organic wastes. You simply use worms to make this process run its course. These worms then turn these organic scraps into a rich black soil material, which you can later on use to supplement your plants and soil (amongst other benefits).

As previously mentioned, there are types of nightcrawler worms, and the European kind would be one of them. Now this nightcrawler type can still be used for composting. But it has been observed that gardeners prefer using red worms, over the Europeans worms, especially when it concerns vermicomposting. Although it can still be used for composting. They can still make for good composting worms by helping aerate and fertilize the soil. Other than that, they also help make burrows of tunnels, to allow air and water to flow into the system. They are also the best worms to make as fish bait. But other than that, they are also good as live worm food for a variety of birds, reptiles and amphibians.

Amongst other nightcrawler types, the African nightcrawler is also a common one when it comes to composting. African nightcrawlers, also known as Eudrilus Eugeniae, is a very common commercial worm. It can be used as bait for fish, and also for composting. These African worms can be found in composting bins and worm farms; and can also produce its own batch of rich worm castings, just like Red Wiggler worms. It is through vermicomposting that worm composts are created. The worm composting process basically helps in the breaking down of decomposing organic materials (a blend of kitchen scraps and garden wastes). And just like the European worms, they too can produce an organic and nutrient-rich compost.
When raising nightcrawlers, you should know of their other contributions in the garden. You can simply rely on them to do the following things:

So, the next time you hear the question, how to vermicompost with nightcrawler worms? You should be able to supplement the answers soon after. And if you want to know more about the types of nightcrawlers, you may simply read on our previous article about it.

You definitely won’t go wrong with our European Nightcrawlers! These Super Red Worms are easy to raise; and are heat and cold resistant. Other than that, they breed really fast; and are also great for using as fish bait. So buy your own batch with us today!
To know more about the product, check the European Nightcrawlers here.

7 comments on “How to Vermicompost with Nightcrawler worms”