The Economics of Coffee Grounds

Coffee brewed at home has become increasingly diverse. In the past, only a few factors distinguished one coffee from another. Roast and brand name were the main attributes setting ground coffee or coffee beans apart. However, in the past 25 years, Americans have become fussier about their coffee. Is it organic? Fairtrade? Where was it grown? What is the strength? The acidity? Flavored? The coffee aisle at the grocery store has a dizzying array of choices. Specialty coffees from the health food store, coffee and tea boutiques, online mail order, and coffee shop chains mean even more selection.

The more characteristics, the more expensive. For example, ground ethical coffee runs around $15-$25 per 12 oz – 16 oz.[1] On the other hand, the extra cost helps support communities and bring farmers out of poverty.

Using a single-serving coffee pod is more expensive than brewing a pot. A 25.6-ounce canister of Maxwell House French Roast Ground Coffee makes 210 cups of coffee and costs $7, or 3 cents per serving. A 12-pack of the same coffee in pods costs around $8, or 65 cents per serving.

Is there a way to get more value from coffee grounds? 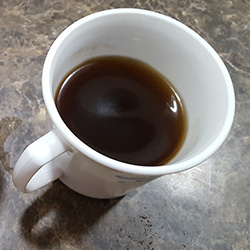 Can you re-use coffee grounds to brew another cup or pot of coffee? The test kitchens at Uncle Jim’s Worm Farm gave it a try. We used coffee grounds in a single-serving reusable basket.

The first cup was dark and delicious.

We ran water through the coffee grounds again. What came out might technically qualify as a coffee-like substance. It was dark and warm. However, this brew’s flavor was weak and watered-down. Coffee from re-used grounds contains much less caffeine. The coffee beans only have a set amount of solids, oils, flavor compounds, and caffeine. The first cup extracts most of these substances. We tipped the second cup down the sink.

So if we can’t re-use coffee grounds to make more coffee, can we still extract some goodness? We can’t, but composting worms can! Red worms turn trash into treasure: valuable fertilizer for your plants. 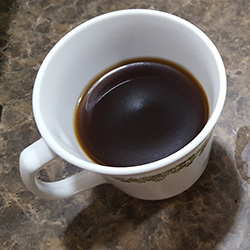 The worms have a voracious appetite for organic matter. They will eat through coffee grounds, potato peelings, kitchen scraps, left-over vegetables and fruits, and uneaten oatmeal. Worms will then excrete a substance called “humus”. This worm poop is one of the best all-natural fertilizers on the planet. After a few months, you can harvest the worm humus and dig the black excrement into the soil. Your plants will grow strong, and you will get more value out of your coffee grounds.

A Tip for Composting Coffee Grounds

Coffee grounds alone are a bit too acidic for the worms. Crushed eggshells act as a buffer. The worms will use the eggshells as “grit” to help grind up food inside their bodies. To add eggshells and coffee grounds:

You can learn more about setting up a composter on our website. Uncle Jim’s Worm Farm is the #1 supplier of composting worms in the United States. Check out our live worms, composters, and supplies.

[1] “How Much Should You Pay For Coffee Beans?” JavaPresse

7 comments on “How Can I Re-use Coffee Grounds?”