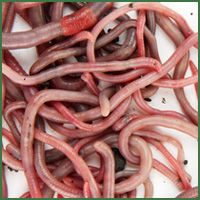 Here are some facts about your vermicomposting worms that you may not know:

Worms are blind and move around in the dark. And it’s not because they’re wearing dark sunglasses – they don’t even have eyes.

Worms are afraid of the light. They move away from it because they know that if they are exposed to it for too long (e.g. around an hour) they will become paralyzed.

Worms can tunnel way down in the soil. And they can take over your land. For example, in one acre of land, there can be up to a million of them. It’s like an invasion happening when you’re not watching.

They’re not as fast as the Australian tiger beetle, which has been recorded speeding along at 6.8 km/h (4.2 mph) or 171 body lengths per second. But they’re not as slow as the banana slug, which only averages around 32.5 feet per hour. Or coral, which doesn’t even go anywhere.

Worms can become giants. For example, one earthworm in South Africa was 22 feet long. And one Australian earthworm weighed in at 1 1/2 pounds.

Worms are cold-blooded. So they’re like snakes in this respect.

Worms breathe through their skins. This is how they make up for the fact that they don’t have lungs or other respiratory organs.

Worms can turn your garbage into gold (or at least that’s what farmers call their black gold, vermicast). Worms can eat their own weight in food each day.

Worms are slimy. In fact, they secrete it and their lubricating fluid contains nitrogen. So they’re moving fertilizers. Their slime can also turn your soil into clumps called “aggregates.” Aggregates are highly desirable for growing plants.

Worms can regenerate. If you cut a worm, it sometimes grows back that section of itself. It depends on where it is cut. In that respect they’re also like a lizard, which can regrow a new tail, and starfish, which can grow back an arm.

A worm has both genders in one. They have both male and female organs, which means they’re called “hermaphrodites.” They mate by lying together and exchanging sperm. Then each worm forms an egg capsule and releases the capsule. Baby worms hatch out of these egg capsules.

Worms sometimes try to escape. The odd worm can be a bit of a rogue in that it likes to hang out near the lid of your worm bin. Don’t worry. It’s just a wanderer. But if you feed your worms the wrong food, sometimes they’ll try to escape. They’ll do this if you’ve given them too much nitrogen-rich food, like grass clippings, or too many acidic foods, like tomatoes, coffee grounds, tea bags, onions, pineapples, citrus peels, or too much white paper (which contains bleach).

Or have you been hassling them too often by opening the lid many times a day and leaving the light on? Maybe they’re just stressed, and that’s why they felt they needed to leave.

Keep them happy and they will stick around for a long time!