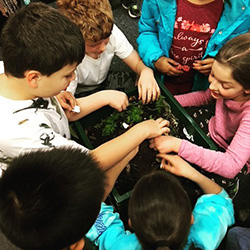 If you are thinking about composting with worms, you will need to weigh the pros and cons first. Some folks start composting to reduce trash and help save the environment. Others are motivated by the end product: nutrient-rich compost for gardens, indoor plants, and lawns. Parents and teachers engage youngsters with a vermicomposting project. Whatever your reason, composting worms have both pluses and minuses. The most common concerns are waste reduction, odor, time, and cost.

Cons: Participants need instructions on what can be composted and how to separate it. Unlike recyclables, compostables start to break down quickly. Collection is highly time-sensitive at room temperature. Stored compostables should be refrigerated or frozen. Organic matter that has already been mixed in with other trash is difficult to separate.

Pros: Regular “hot” composting without worms can be stinky. However, composting worms break down organic matter so quickly that vermicomposting odors are minimal. A well-maintained, healthy vermicomposting bin has an earthy smell. Vermicomposting is well-oxygenated, so friendly aerobic bacteria dominate. Odor is a sign of trouble – see our article about worm bin odors.

Time spent vermicomposting is time well-spent. However, how much time does composting with worms take? Tossing compost into the bin and rinsing the collection container takes just a few minutes every 2 to 3 days. The two activities that take up to 1 hour are:

Pros: Setting up the worm bin is a joyous occasion! You are preparing a home for your new pets! Children especially love this part. Harvesting the compost is not difficult. The harvest gives you fertilizer that makes plants grow strong. Your hourly rate is quite high, versus purchasing finished compost from the store or Uncle Jim’s Worm Farm. You also know that the resulting compost is as pure as the scraps you put into it. No additives, no chemicals. If you don’t need much finished compost, give some to your neighbor. Makes a great gift!

Cons: You may end up spending the same amount of time whether you compost or not. The weight of your trash will be less when you compost. Food and yard trimmings make up about 28% of household trash by weight. Thus, you might be able to get the trash to the curb more quickly. If you take trash to a facility yourself, perhaps you can make fewer trips. And you won’t spend time defending mixed trash from raccoon and dog attacks. The small volume of non-compostable food, such as bones and oily foods, can be frozen until trash day.

Setting up a vermicomposting system requires a composting bin and composting worms. You will want to buy Red Worms from Uncle Jim’s Worm Farm to get started. Collecting random worms yourself or buying worms at a bait shop won’t get the same results. Uncle Jim’s offers convenient indoor/outdoor bins. Is there a break-even point for vermicomposting?

Pros: Finished organic compost and trash removal also cost money. The impact on the environment cannot be measured easily in dollar terms. Hauling away scraps as garbage doesn’t make sense from an ecological viewpoint. Organic matter is designed to break down and nourish new plants. If money is tight, make your composting bin. The composting worms’ population should replenish itself — if not, or if you want a boost, you can order additional composting worms. See our article about composting in the winter.

Cons: Many households have trash pickup at a flat rate. Therefore, they drop just about any amount of trash into a black hole at no extra cost. However, households that pay by weight or volume, businesses, and institutions can anticipate savings once they start composting.

The only way to find out if composting is right for you is to try it! You will probably find satisfaction from reducing trash and saving the environment. With the right tools and basic skills, you can be a vermicomposting expert in a short time. Join Uncle Jim’s Worm Farm email list to get worm articles. We also carry composting worms, composters, and finished compost. Read our blog for composting tips.

8 comments on “Pros and Cons of Composting with Worms”