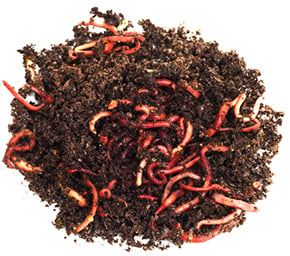 Have you ever wanted to know where worms come from?  We think of them as insects, but sometimes they are much easier to think of more like animals.  Did you know that worms are basically an insect version of a hermaphrodite?  Worms are multisexual, basically they have both male and female reproductive traits.  I thought it would be a good topic to take a look at how worms reproduce, and what their life cycle is like.

Let’s go ahead and start with a month old worm.  This is the age that a worm is typically about ready to start reproducing.  When they are about this age, you start to see a band around the worm, called a clitellum.  This is where all the reproductive organs are.  Now, they do actually need another worm to reproduce, even though they have both sex characteristics. Basically they put their clitellums together, and sperm will be passed back and forth, and stored in sacks.

After this, we have a cocoon in each worm’s clitellum, and the sacs hatch when it is dry, and conditions are ideal for them to hatch.  Once the baby worms hatch, they basically go their own way and start eating.  They do not need to be “babied” as it were!

Worms are a bit unique, compared to other insects, in that they can live for a LONG time!  If conditions are right, they may even live for years!  Worms have so much water in them, that they will die if they dry up.  This is why after a rainstorm, when worms are on pavement, if they do not leave and it gets sunny, they will die on the pavement.  After they die, they basically dry up and become part of the soil in a composting process.

Worms provide an important part of keeping our environment and soil healthy for growing fruits and vegetables, and other important plants.  With that being said, there are always enough for birds and fishing!