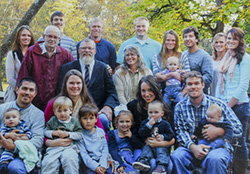 Jim grew up on a farm in Connecticut. He started raising fishing worms from the age of 8, at first for pocket money. Eventually, worm farming grew into a full-time business. Jim played football for Colgate, and moved to his own farm in Spring Grove, Pennsylvania. He bred Red Worms for composting, and European Night Crawlers for aeration. All of these made good fishing worms. He added mealworms for pet owners, bird lovers and science experiments. And along the way, he started a family.

Working on a farm using traditional tools builds muscle. For many years, the eight Shaw children worked the worm farm with limited automation. They hauled feed, extracted worms, put on roofs, dug trenches and made farm repairs. All three Shaw boys — Jimmy, John and David — went on to play Big Ten college football, following in their father’s footsteps. They are each more than 6 feet tall and built to mow down linemen like a combine harvesting wheat.

The article focused on David Shaw, Jim’s youngest son. He plays for the University of Maryland in College Park. Unlike most other players, he does not wear gloves on the field. “Why would he need them?” said the article. “His massive hands were shaped and textured by worms and the soil they crawled through over the years, raw enough for Shaw to burrow his own holes in the trenches as a defensive lineman.”

A Visit to Uncle Jim’s

The author, Roman Stubbs, visited Uncle Jim’s Worm Farm to get a handle on the operation. David fearlessly picked up handfuls of slimy composting red worms and posed for a photo. Stubbs described the interior of the farm buildings: “Inside a dank barn, a harvester hummed. A geothermal unit pumped 61-degree oxygen to help keep the worms comfortable. A pair of workers sorted through bins in preparation to package and send thousands of red wigglers and European night crawlers to fishermen, gardeners, farmers, golf course owners and bird enthusiasts across the country…”

Stubbs described specifics of how the Shaw boys “packed on mounds of muscle” on the worm farm. Their chores included lifting 200-pound drums on one shoulder and carrying 50-pound bags of coal to the furnace. To get in shape, they ran drills around the property with the coal bags as shoulder weight. David’s older brothers put him through the same workouts they learned at Penn State.

The article ends by discussing Shaw’s football injuries, prospects and character. Read the article on David Shaw in the Washington Post website now.

Editor’s Note: Uncle Jim’s Worm Farm is the #1 supplier of composting worms in the United States. The business is well-known in sustainable living and organic circles, as well as golf courses and schools. As the Internet has grown, so has the UncleJimsWormFarm.com website. They ship live worms year-round all over the country. They also carry a selection of composting supplies, organic pest control, finished compost, seeds, composting books and composters.