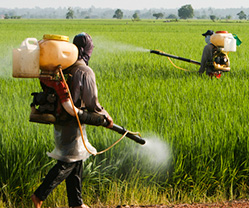 For many, the produce section of the grocery store is the best part of their shopping experience. It’s a quiet place where you can smell the freshness, see the spectacular colors of fresh produce and hear people softly humming to themselves while taking their sweet time. I guess you could say that it’s a gardener’s sanctuary.

However, that scene comes after the hustling and bustling of early morning shifts where heavy boxes and crates of produce are unloaded from trucks and workers frantically scurry to get the produce out by opening hour. Remember there’s a lot that goes on behind the scenes in grocery stores, packing plants and during the growing season that we sometimes forget about when routinely picking up fruits and vegetables.

One such thing is the use of pesticides, which is why you should always wash fruits and veggies before preparing and eating them. Pesticides are used on produce throughout the growing season to keep worms and other insects from destroying them. Fruits and veggies are washed before going on the shelves in produce departments, but you should still wash them at home as an added safety measure.

Another reason to wash produce at home is because you never know how many hands have picked up and put back that apple, plum or pear you ended up bringing home. Did you know that shopping carts have been known to contain more traces of saliva, bacteria and even fecal matter than elevators, public telephones and public restrooms? [source]

Top 10 Fruits With Most Pesticides On Them

According to the Shopper’s Guide to Pesticides, here are some of the dirtiest fruits found in grocery stores in order from most to least dirty. Be sure to wash these fruits well before eating or serving them.

Peaches and apples are the dirtiest fruits in produce departments, both containing up to 50 different types of pesticides! In one recent study of imported nectarines (aka “peaches without fuzz”), 100% of samples tested contained multiple pesticides on them [source]. Strawberries are also referred to as dirty as they contain up to 38 different pesticides.

Grow Your Own Produce!

We don’t want to discourage you from picking up produce at the grocery store, but be aware that many of the fruits and vegetables you are accustomed to eating may have leftover contaminants on them and it’s important to clean them well prior to eating them. At the same time, we here at Uncle Jim’s Worm Farm encourage you to grow some of your own produce this year! It’s healthy living and healthy eating! Berries, melons, squash, sweet corn, red potatoes, tomatoes, carrots, peppers, onions and more can be easily grown right at home and the best part is, it’s 100% organic!

Plus, we offer the best organic fertilizer in the world! Our red wigglers provide home gardeners with rich compost that helps plants grow larger and healthier, and produce bigger, better tasting fruit. Try it today!