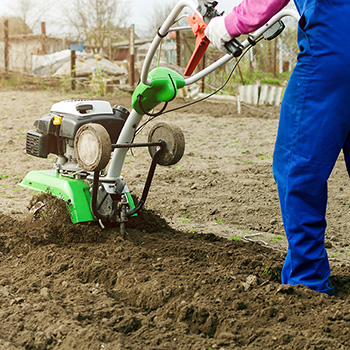 Getting your garden ready for the spring is very important, especially when it comes to organic fertilizer. Fertilizing the soil before planting provides crucial nutrients to help the vegetation grow strong. Composting worms produce a dark organic fertilizer that gardeners and farmers treasure. The fertilizer is called “worm castings.” When preparing the garden for spring planting, you’ll need to build up soil fertility and begin to loosen the soil as well. These instructions are going to teach you how to efficiently and effectively dig worm castings into your garden. It is recommended to start doing this a few weeks before it is time to plant.

Worm Castings: Where to Get Organic Fertilizer

Worm castings, or worm poop, are made in a special bin that contains composting worms, bedding and food scraps. If you have a worm bin, or it does not have enough worm castings, you can order finished compost from Uncle Jim’s Worm Farm. The packets will contain worm casting we made directly on our farm in rural Pennsylvania.

If spring is at least 3 months away, you can start producing castings by starting a worm bin. Red Worms are the ultimate choice for making all-natural organic fertilizer. We sell our Red Worm Mix on our website www.unclejimswormfarm.com. You can either purchase or build your composting bin. Here at Uncle Jim’s Worm Farm, we sell specialty composting bins that use trays for super-convenient worm management.

Follow the steps to set up your new worm bin. After it is set up, you can begin feeding your worms with kitchen and garden scraps, and in a few months, you should see dark, crumbly matter in the bin. These are the worm castings. Composting with worms works faster than traditional composting because the worms will eat the scraps and break them down efficiently.

When it is time to harvest your worm castings, remember that it is best to leave the worms and undigested scraps inside the bin. Digging around in the worm bin will produce about a cup or two of organic fertilizer easily. For large amounts, try one of the following methods instead:

Build a screen. Add worm bin contents to the screen (see instructions) and shake it over a container. Only the compost will fall through, leaving you with worms and debris on the top. This will also aerate the compost and break it down into smaller pieces. What you have left in the container is perfect for using in the garden. OR

Separate the compost manually – check out our article for more information. OR

Separate the worms and compost using small piles; use light; or attract the worms with food. Check out this method in the compost harvesting article.

Red Worms are most likely to survive in manure and rotting vegetation than in soil. If there are a few stray worms in your finished compost, don’t worry! They won’t do any harm. European Night Crawlers (Super Reds) are best suited for living in a garden.

Loosen Up the Soil by Digging

Weather will compact the soil over time. However, the plants need loose soil to grow roots and push out. So when the earth is dry, use a broad pitchfork or other tools to loosen the soil. Also, break down clumps and remove any rocks.

When to Build Soil Fertility

Your worms might not have produced enough worm castings for a large garden. If this is the case, you can mix your worm castings with grass clippings or another organic fertilizer to stretch it.

A few weeks before planting, add between 1/2 inch and 1 inch of organic fertilizer on top of the soil. In addition to providing valuable nutrients and air pockets, the fertilizer will help the soil handle moisture levels.

It’s virtually impossible to apply too much organic fertilizer. You want to throw as much as you can at that spring soil! On the other hand, you only have so much fertilizer to go around. For nutrient-hungry crops such as sweet corn, dig a trench and add a layer of worm castings. Push soil on top of this layer. Plant as usual. The roots will find the nutrients and grow down to feed on them. Heavy feeders such as tomatoes and cruciferous vegetables: while planting, put some organic fertilizer in each planting hole. Those shallow-rooted, light feeders such as lettuce just need a small amount raked into the top couple of inches of the soil.

Keeping your garden as chemical-free as possible requires organic fertilizer. Make a partnership with composting worms! Once your worm bin is set up, composting worms are a self-renewing source of unlimited organic fertilizer. Just feed them your kitchen and garden scraps, and they will automatically produce worm castings. It’s a win-win, with little effort on your part. Try composting with worms today! Uncle Jim’s Worm Farm is the #1 supplier of the Red Composting Worm Mix and Super Reds in the USA. We also offer composting bins specifically designed for worms, composting supplies, mealworms, books, organic pest control, worm food and bedding, and more. And we ship worms year-round.