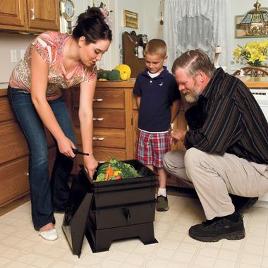 Vermicomposting is a great way to reduce trash and make free fertilizer. Composting worms will eat most of the inedible scraps from the kitchen, as well as many left-overs. This is better for the environment than tossing it into the trash. The result is dark, rich organic fertilizer. Worm excrement is treasured by gardeners because it helps plants grow. While most composting is done outdoors, you can run a successful composting program indoors. Some worm owners move operations indoors during the winter. Others do indoor composting year-round for convenience or due to lack of suitable outdoor space. Uncle Jim’s Worm Farm has these four tips for successful indoor composting.

Tip 1: Be an Odor Cop for Indoor Composting

Outdoors, a little odor does not matter much. Indoors, a stench could cancel your composting program. You will need to be stricter about what goes into the bin. Banana peels and chunks of broccoli get quite malodorous when they start to break down. Any vegetable that is distinctly stinky should be banned from the indoor bin. Either toss it in the trash, put it down the garbage disposal, or deposit it in an outdoor composting bin (if you have one). Always, always bury any food scraps you add to an indoor bin. This leads us to the next tip, which is also important for controlling odors:

Tip 2: Do Not Overfeed

It is tempting to treat the worm bin like a trash can and stuff it until it’s full. A vermicomposting bin is a miniature ecosystem. In the dark bedding, the worms need a balance of food and moisture. Add too much food and they cannot keep up. Large amounts of scraps begin to rot, creating odors. Excess food also throws off the pH of the bin, creating a host of other problems. Be realistic about how much the worms can eat. Cut the food up small or use a food processor. If you are just starting out, or your bin is not especially productive, add a small amount of food at a time. Add food every two to three days, after the worms have started breaking down the last feeding. Better to freeze or discard extra scraps than to wreck the bin’s ecosystem.

Tip 3: Keep Them in the Composting Bin

If the worms are happy, they will stay in the bin. You might find an occasional escapee, but you should not find a trail of them on your floor. If you do, something might be wrong. Start by opening the bin and shining a light in there. In just a few minutes, they should dig deep into the bedding. Then, evaluate the bin’s health. Squeezing a little handful – it should seem like a wrung-out sponge. If it’s too wet, add some pure peat moss or shredded newspaper. If it’s too dry, sprinkle on a little moisture and gently stir. Keep the lid on the bin — not because the bin is air-tight, but to keep the bin nice and dark. Worms love that. Investigate and see if there are any possible reasons why they might want to escape.

A few insects in the indoor bin are not a big deal. They help break down the compost. The most common problem is fruit flies. Fruit flies are a nuisance, but they will not harm you. We recommend using a fruit fly trap or vacuuming them up. Check out our fruit fly guide for more details.

The best type of bin for indoor composting is one that uses stackable trays, such as the Worm Factory 380, the Can-O-Worms, or the Worm Cafe. They are better for controlling moisture than tote-based composters. Uncle Jim has been breeding composting worms for nearly 40 years from his farm in Pennsylvania. We ship all over the United States, year-round. The best worms for composting are Red Worms. The larger Super Reds (European Nightcrawlers) are useful for composting, but they are better for aeration and releasing into the ground. Please check out our website for more information.

2 comments on “Indoor Composting with Worms: 4 Tips from Uncle Jim”