Blog / Why Tray-Based Composters are Best for Worm Castings 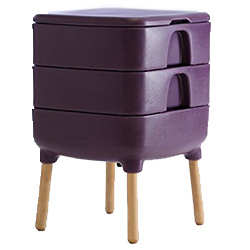 Why do people use specialized tray-based composters for composting with worms? Why not just use a regular, deep composting bin from the hardware store? Many vermicomposting projects are for small-scale households. They want to turn their kitchen scraps into free fertilizer: worm castings, also called “black gold.” Black gold that nourishes plants, flowers, shrubs, trees, and lawns. Composting scraps reduces waste volume and odors in the household. A busy household looks for convenience and cleanliness. Tray-based composting bins foot the bill!

We have discovered that the easiest method to maintain and harvest a vermicomposting bin is by using specialized tray-based composting bins. The worms separate themselves from the fertilizer by crawling up. This makes harvesting the fertilizer much easier. Also, trays are lighter to lift than huge bins. The bin may have a collection tray at the bottom to capture any moisture run-off. You can turn the spigot to drain the water, then discard it.

How to Start Tray-Based Composters 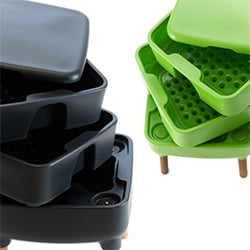 This tiered tray composting system puts the focus on the top tray. That’s where most of the worms will live. Why? They want food! And you will only feed them in the top tray.

When you start your composting bin, you will start with one tray. The tray goes on a frame with legs to keep it off the floor. Create a comfortable home for your worms. Bedding recreates their natural environment. It can consist of a blend of shredded brown corrugated cardboard, coconut coir, shredded black ink newspaper, to name a few items. Feel free to read our blog posts for additional bedding choices. We suggest that the bedding is as moist as a wrung-out sponge.

When the bedding is ready, gently place your composting worms on top. We usually recommend Red Wigglers, aka Red Worms, the Kings of Composting. You could use European Night Crawlers, aka Super Reds if you also want them for fishing. Don’t worry about what to do with your worms once you add them. They will naturally tunnel into the bedding and make it their home.

These composters can be placed indoors or outdoors.

What to Feed Your Worms

Feed your worms in the tray you just completed. Their food will consist of leftover non-acidic fruits and vegetables with no oils, sauces, or spices. Either chop up these leftovers into small pieces or even use a food processor. Please do not place meat, dairy, hot spices, and bones into the tray. Your worms cannot digest these items. These foods will make them ill. Check our blog posts for more information on what to feed your worms.

Over time, a black substance will start to fill this tray. This is the black gold, also called worm castings. When the tray is getting full, it is time to start a new tray on top.

The new tray needs bedding to keep the worms comfortable. You could make more bedding. Or, scoop out some of the contents of the lower tray, and place it into a fresh new tray. Put that new tray on top of the first one.

Put the food scraps in the top tray. Don’t worry; your worms will soon populate that tray. It’s their nature to gravitate toward food. Continue the process of adding another tray on top once this bin is filled with worm castings.

We suggest that you let the trays accumulate for a while. Over time, you can harvest the bottom trays as needed for your gardens. How can you tell whether the material is ready? The trays should be full of dark composted matter. If there are a few stray worms in there, you can move them to the top tray or just leave them in the finished compost.

You may find fruit and vegetable remains as well as seeds, pits, rinds, skins, etc. People use the compost “as is” by simply removing the tray and emptying it on their lawns and gardens. Others may prefer to hand-pick remains or use a screen to sift. You can use the compost to make worm tea, as a side dressing, to make starts, to fertilize the garden, and on the lawn.

You have successfully turned food scraps into black gold!

Uncle Jim’s Worm Farm is the #1 supplier of Red Wiggler Mix and European Night Crawlers, also called Super Reds. Super Reds are the larger composting worms that make good fishing bait. They can also be released into gardens and lawns for aeration.

Uncle Jim’s Worm Farm raises its worms in rural Pennsylvania. They ship their worms throughout the continental United States all year long.

For additional information, check our other blog articles on this website.

Uncle Jim’s Worm Farm’s selection of tray-based composters come with instructions. Some may even include worms.