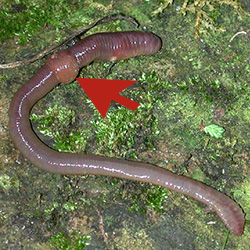 Vermicomposting worms follow a similar life cycle pattern as humans: birth, growth, procreation, and death. In this article, we examine the life cycle of the popular earthworm: Red Wigglers, the Kings of Vermicomposting. These worms are distinctly different from humans when it comes to reproduction. For example, there are no “boy” red worms or “girl” red worms. We find worms fascinating and are grateful for the rich organic fertilizer that they produce from our table scraps.

Worms possess both male and female reproductive sex organs. These organs are contained in a bulbous gland called a clitellum. The clitellum is located outside the worm’s body. Although difficult for us to see, it resembles a ring. When the worm is fertile, the clitellum advertises to potential mates. That’s because it becomes visible and turns orange, a signal that all’s clear for making babies. Even though Red Worms are hermaphrodites, they do require another partner to exchange genetic material. In other words, they can’t do it alone.

Red Worms typically prefer to reproduce in warmer temperatures. They line up side-by-side. The clitellum of each worm secretes mucus and albumin. The worms exchange sperm. When the exchange of genetic material is complete, they separate. The act of separating causes the sperm to mix with eggs, fertilizing them. Then, the worm wiggles out of its clitellum. This forms a cocoon to safely host the fertilized eggs. As the cocoon is deposited on the ground, it automatically seals itself.

The cocoon is as small as a grape seed and golden yellow. It can be found near the worm bin bedding’s surface. Cocoons are very hardy and can withstand freezing temperatures as well as high levels of moisture. A cocoon is so durable that it can last up to a year. The eggs are kept safe inside the cocoon until conditions are right to incubate. Incubation takes approximately three to four weeks. When the cocoon changes color to maroon, the eggs inside are ready to hatch. Each cocoon contains at least four to six baby worms. At birth, the baby worms will be ready to start eating food scraps.

The Life Cycle of a Red Wiggler

We had just discussed the Egg stage of a worm’s life cycle. The Juvenile stage begins after they’re hatched. Baby worms don’t have reproductive organs. They’re only a half-inch long and no thicker than a few strands of hair.

At two to three months’ old, baby worms grow up. They’re deemed officially mature when their reproductive organs fully develop. That kicks off the Mating stage–when they’re ready to reproduce. Once again, the cycle of life repeats itself when the clitellum turns orange.

Under ideal circumstances, two cocoons a week can be produced for each worm. Don’t worry that your worm population will get out of hand and multiply incessantly with no end in sight. Fortunately, your wrigglers are endowed by nature with a natural way of inhibiting births. They will only make babies to the extent of the space within the composting bins. You take good care of your worms, and they can lead a healthy life in the worm bin for up to five years. In return, they will continue to provide you with natural organic fertilizer.

Uncle Jim’s Worm Farm is the #1 supplier of composting worms and supplies. All our worms are born and bred in the USA at our farm in rural Pennsylvania. Check out our Red Worms for composting, and European Night Crawlers for composting, fishing, and aeration.

15 comments on “The Life Cycle of Vermicomposting Red Worms”