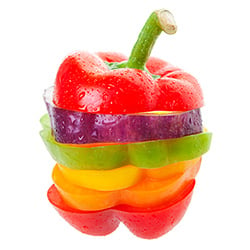 Indoor composting worms gobble up kitchen scraps, but what is the best way to feed them? Which foods are best? How is feeding indoor worms different from outdoor worms? Feed them well and you will get nutrient-rich fertilizer, perfect for helping plants grow. You will also reduce trash and virtually eliminate garbage odors. Uncle Jim’s Worm Farm offers these tips for feeding composting worms indoors.

Composting inside your house is almost impossible without worms. Composting worms break down the scraps quickly. This helps prevent odor and pests. Hot composting without worms takes too long inside the home. Adding a bag of Red Worms to a suitable indoor composter makes the scraps disappear quickly!

People compost indoors for several reasons. Some are apartment or city dwellers who do not have outdoor space. Others want convenient access to the composting bin. And some want to run their composting program year-round, even when the weather is cold. In that case, they may move the bin indoors in the colder seasons, or keep the bin indoors all the time.

Indoor composting requires a bit more care than outdoor. It all starts in the kitchen, where you prepare the food.

Which Type of Kitchen Scraps to Feed Worms

Preparing food from scratch inevitably results in waste. We cannot digest raw carrot tops, broccoli stems, and banana skins. Old food will spoil. Left-overs can fill up the fridge. Finicky eaters, illness, and no-shows result in food waste. And if no one likes that new cereal, it has to go!

If you are composting outdoors without worms, you might have a “chuck it all in” attitude. Hot composting without worms has more leeway than vermicomposting. Worms, however, live in the tiny ecosystem of their bin. Certain food scraps can damage their environment and make them sick. Avoid feeding worms:

A few foods are fine for outdoor vermicomposting, but will stink up an indoor bin. Bananas and banana peels, broccoli, and vegetables from the cabbage family are known to smell bad. Learn more about reducing composting odors.

How to Prepare Worm Feed

Worms do not have teeth. They suck food into their mouths. Similar to chickens, worms use “grit” in their digestive tracts to help break down food. Therefore, food needs to be small. Larger pieces take longer to break down. Also, soft foods are easier for the worms to eat. Therefore, softer organic matter breaks down faster in a worm bin.

If you have time, cut scraps into small pieces using a kitchen knife. A hand chopper or food processor can speed up the process. Cutting can be done during food preparation or after the meal.

Scraps can go straight into the worm bin. Or, you can store the scraps in a container for later. Ideally, the container of scraps should be put in the refrigerator. This helps prevent premature spoilage and odors.

How Much to Feed

Under ideal conditions, worms can eat about half their weight in a day. If you start with 1000 worms from Uncle Jim’s Worm Farm, you will have 1 pound of worms. Therefore, feed them up to half a pound of scraps each day. With a new bin, start with less and work up. If they have trouble finishing the food in a week, feed less. Store extra food in the fridge or freezer for later. See our post, How Much to Feed Composting Worms? for more details.

Scraps added to indoor bins should be buried in the bedding. This suppresses most odors and makes the food easy for the worms to find. Start in one corner. Dig a small hole in the bedding and add the scraps. Cover with bedding. The next day, dig a hole next to the first feeding. Continue to work your way around the bin. By the time you reach the first corner again, that food should be gone.

Uncle Jim’s Worm Farm has expert worm information and composters. We recommend Red Worms for composting. European Night Crawlers, or Super Reds, can be used for composting, as fishing worms, or for releasing into the garden or lawn.

6 comments on “How to Feed Composting Worms Indoors”