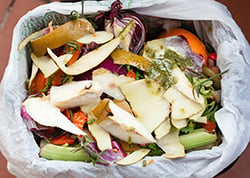 Everyone who composts with worms has asked themselves, “How much should I feed composting worms?” Red Worms are ideal composting worms. They need regular feedings of kitchen scraps and gardening waste. Composting worms quickly convert these scraps into valuable organic fertilizer. Feed composting worms too little, and they starve. Feed them too much, and they can’t keep up. Too much rotting organic matter can cause odors, mold growth, excess moisture, and damage to the bin’s ecosystem. Find out how much food is just enough for your worms.

In theory, red worms can eat half their weight each day. This number applies to a settled worm population under ideal conditions. Since worm bin owners start out with new composting bins, we will also start there.

If the worms just arrived in the bin, they will need time to adjust. New composting enthusiasts tend to over-fill the bin with excess scraps. Like anxious new pet owners, they don’t want their new worms to starve. Worms shipped from Uncle Jim’s Worm Farm arrive somewhat dehydrated. They have not eaten in a few days. Packed in peat moss, the worms had little to eat. The worms slow down and go into a partially dormant state. They need a little time in their new worm bin to dig in and get comfy. They are also starting to eat the bedding. When adding new worms to a new composting bin:

How Much to Feed Composting Worms by Weight

*Approximate Weight of Worms when shipped, not including bedding

**Half of Their Weight (Amount they can eat per day, ideally)

Note: In a healthy bin, the worms will reproduce. More worms mean you need to feed them more.

You will find yourself feeding the worms every day, or every couple of days, or a few times a week. Feeding frequency will depend on how fast they work through their food. Also, your schedule might be tight, allowing feedings twice a week.

If you are going on vacation and don’t have a pet sitter, feed composting worms their typical amount, then place cardboard or newspaper on top of the food. They will start eating the cellulose when the food runs out.

Weighing your worms is not very practical. Separating the worms from their bedding and popping them up on a scale every month is way-overkill. Unless you are running a scientific experiment, you’ll need another method: for example, feed composting worms them in a pattern.

We recommend feeding them along the bin’s interior wall in a clockwise or counterclockwise pattern.

Feeding in this pattern makes the food easy for the worms to find. This method also helps you figure out how often and how much to feed them.

Consequences When You Feed Composting Worms Too Much

Feeding worms too much food has consequences:

Feed your worms chopped-up kitchen scraps – not too much, and not too little. If you have excess scraps, refrigerate or freeze them for later. Or, dispose of them in the trash, down the garbage disposal unit, or in another composting pile. It’s better to waste a little food than harm your worm bin.

20 comments on “How Much to Feed Composting Worms?”