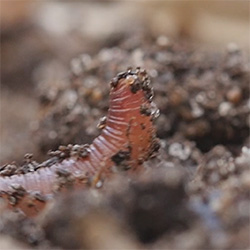 Worms are ancient creatures that have been moving through the Earth’s soil for many, many years. But, how exactly do they move forward? Worms do not have legs, so they must use other methods to travel.

What Makes A Worm?

Earthworms are a part of the phylum Annelida, which is Latin for “little rings.” This is because they have small rings around their body that are referred to as “segments,” which are crucial to their movement. Without these segments, they would likely not be able to move. These segments contain eight small bristles called “setae.” To move, worms use these bristles to clutch the soil around them.

The only segments that do not have setae are the first segment, the head, and the last segment, the tail. While the head usually moves forward, worms can move backward as well. Like most creatures, the mouth is contained in their head and it allows them to eat food and soil. They produce humus (poop) out of their tail. This worm humus is what vermicomposters collect to use as an all-natural fertilizer.

Worms do not have any bones, which allows them to squeeze into small spaces and grants them unrestrained movements. They create tunnels as they move through the soil by eating whatever matter comes before them. As they move through these tunnels, their bodies emit mucus that helps to steady the tunnels. The tunnels that these worms create are vital for the health of the soil because they bring air, water, and nutrients.

How Do Worms Move?

The worms we use for composting move by using their muscles to slink through the earth. They have muscles throughout each of their segments that contract and expand to propel them forward. The process of moving is like this:

How Do They Navigate?

Worms do not have legs, eyes, noses, or any appendages, but they still manage to navigate through their surroundings by using other methods. Worms have an organ in their head called a “prostomium.” It’s a small section that is above their mouth, and it looks like a lip. This organ allows the worm to feel its surroundings.

Their skin is also very sensitive and is crucial for providing them with other sensory information. Worms are very sensitive to light, so they have cells that are light-sensitive throughout their skin, and even more at the ends. These cells sense both light and its intensity. They will always shy away from the light because they prefer to be in the dark.

Worms’ skin is easily irritated, so any contaminants in the soil or their bedding will aggravate them. Their skin can also detect temperature, and they will always try to find areas that have enough air and moisture. Worms will get sick or die if they are too wet or too dry, so they need a happy medium. They can also feel any vibrations in the earth around them. Worms will always move towards areas in their bin that provide the ideal environment.

How Do Worms Behave?

Even when in a composting bin, worms will still perform the same. They move around and create tunnels through the soil/bedding, making it very soft. Their humus is excellent as an all-natural fertilizer. Make sure you are keeping your worms comfortable by providing them with enough food, air, and moisture. They will stay hard at work eating all your food scraps and providing you with fertilizer, so long as you protect them from extreme heat and cold.

Red Wigglers are the best composting worms out there. Uncle Jim’s Worm Farm has been providing all-American worms for over 40 years from our rural farm in Pennsylvania. We also have Super Reds, which are good for composting, fish bait, and garden/lawn aeration. Uncle Jim’s is #1 when it comes to worms and supplies.

4 comments on “Composting Worms and How They Move”