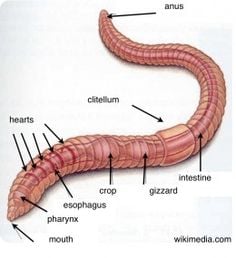 The best type of worms for your composter is the Red Worm (Red Wiggler). Their voracious appetites, medium size, and heartiness make them ideal composting worms. Falling into the genus “anulus,” meaning “ring” in Latin, the Eisenia fetida has up to 120 circular rings.

Ever notice the rings on a red worm? These rings are made from circular muscles. They expand and contract, which shortens and lengthens the worm’s body. Muscles also run the length of this worm. Together, these two types of muscles make the worm move in all directions. The bedding they live in needs to be moist to lubricate the worm’s motion.

Ever seen a bird try to pull a worm off the ground? Sometimes the worm fights back by clinging to the ground. Most of the rings on their bodies have setai sticking out. These hair-like, stiff protrusions grip the soil. They also help the worm navigate instead of just sliding around.

Red worms are simple creatures, and this is reflected in their basic brains. The cerebral ganglion is a bundle of nerves that receives sensory data. For example, the cerebral ganglion processes data about moisture levels, vibrations, light and heat. The worm can then respond to its environment to keep itself safe, fed, warm, etc.

Red worms are not likely self-aware, but they are living creatures. As such, we should show respect whenever possible. If your indoor composting bin has too many worms, try to wait until warm weather to release some of them outside. Also, do not allow pets or children to violently play with them. And take care of your composting bin so that the worms can thrive.

Red worms have a five very simple “hearts.” Each chamber has a valve that regulates the flow of blood. The blood delivers nutrients and oxygen throughout the body. The outer cuticle of the worm brings in oxygen. Liquid waste products — urine — is excreted through the skin.

Worms are hermaphroditic. They reproduce by joining clitella, wide bands that are visible when they are fertile. Learn more about red worm reproduction.

The worm’s mouth has sensory cells that detect minerals and foods. They can tell the difference between edible and inedible matter. And they will seek out edibles.

Similar to a suction pump, the pharynx pulls food from the mouth into the digestive tract. Food travels down the esophagus, into the crop. You may recall that birds also have a crop, for storing food (similar to a stomach).

Next, food is ground up in the gizzard. Sandy particles, or grit, from the soil smash food into tiny pieces.

Then, the partially-digested food goes through the intestine, which is almost 2/3rd the length of the worm. The worm absorbs many nutrients during this part of the journey. Finally, the worm excretes through the anus.

Gardeners treasure worm poop, also called “castings” and “humus.” Worm castings are a dark, nutrient-rich fertilizer for plants. When concentrated in a composting bin, humus can be harvested easily. Gardeners and farmers can then apply the humus to the soil around food-producing and decorative plants. Part of its great value comes from the living microorganisms in the humus. Earth-friendly bacteria, fungi, enzymes, protozoa, and actinomycetes live in the worm’s digestive system. Some of them show up in the finished compost. Compost from worms should be used up within a short time before all the microorganisms die. Compost that has sat longer still works because it contains composted organic matter. But fresh compost from worm excrement is the most potent.

Red worms are humble creatures. Their anatomical features make them ideally suited for breaking down organic matter. People learned to harness the power of the red worm by concentrating the worms in a composting bin. The resulting worm castings make an inexpensive and 100% organic fertilizer for plants. Uncle Jim’s Worm Farm is the #1 supplier of composting worms in the United States. We ship out live red composting worms that are grown on our farm in rural Pennsylvania. We also offer Super Reds (European Night Crawlers) for aeration and mealworms for pet food and science classes.