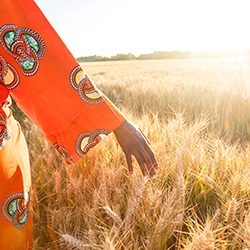 Simply by doing what comes naturally, worms are helping humans. These small invertebrates eat organic matter and excrete fertilizer. This process improves soil quality and increases crop yields. Farmers, institutions, and householders have learned how to harness the power of composting with worms. Vermicomposting is cooler and faster than composting without worms. How is composting with worms helping smaller farmers grow more food for less money?

How does vermicomposting scale up? A small worm bin in the kitchen services a family by disposing of kitchen scraps. The resulting fertilizer can nourish potted plants and garden ornamentals. An outdoor worm bin quickly turns kitchen and gardens scraps into fertilizer for a kitchen garden. The subsistence farmer who employs who composting worms generates free fertilizer quickly. And the small commercial farmer rapidly turns wasted organic material into fertilizer. Thus, they save money and improve soil quality.

In vermicomposting, worms are placed in a bin with bedding and food scraps. The scraps can be leftovers, coffee grounds, dead plants, seaweed, and inedibles. The bin will not get hot enough to kill pathogens, so only certain animal manures can be used. The worms eat microorganisms and small pieces of scraps. They grind up the material and break it down using the microbes in their guts. Their excrement contains bacteria and nutrients that help plants grow. Worm poop also contains humic acids and plant growth hormones. Farmers call it “black gold” because it is some of the best fertilizer available.

How Good Is the Compost?

Controlled studies have found that vermicomposting produces high-quality fertilizer. For example, a recent Chinese study compared four types of compost in a greenhouse. They found that tomatoes grown using vermicompost fertilizer grew taller, stronger and thicker, and produced better fruit. The soil was higher quality, which leads to increased yields.1

How to Get Started

To get started composting with worms, make a plan. Estimate how much waste organic material you can feed to the worms. Red Composting Worms can eat half their own weight per day. 1,000 Red Worms weigh about 1 pound. Buy or build a composting bin (link> large enough for your project. Then, order composting worms. (Uncle Jim’s Worm Farm ships only to the United States.)

Follow the instructions that came with the bin to get started. Or look on the Uncle Jim’s Worm Farm website. We have information about building, buying, and setting up a worm bin in our blog and on our web pages.

One comment on “Vermicomposting with Worms Grows More Food”