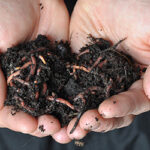 All living organisms go through the same life cycle: birth, development, reproduction, and death. What is the life cycle of the King of Composting, the Red Worm? These worms are hermaphrodites. That means they each have both male and female reproductive organs. Let’s find out how they make new, baby worms!

Red worms’ reproductive organs are in the clitellum, a gland that sticks out from the rest of their body. It looks like the worm is wearing a ring around its body. When the worm becomes fertile, the clitellum becomes more visible and turns orange. The color change is a signal that the worm is ready for reproduction. Worms, even though they are hermaphrodites, do not reproduce alone. At least one additional Red Worm is necessary so they can exchange genetic material.

Warmer temperatures are ideal for reproduction. Two or more worms will all line up next to one another. The clitellums then ooze mucus and albumin. This is how they trade sperm. When it’s all good and done, the worms separate. When they move apart, the movement encourages the sperm and eggs to fuse, causing fertilization. The worm then sheds the clitellum, which then becomes a cocoon that safely houses the fertilized eggs. The clitellum seals itself shut when the worm leaves it on the ground.

The cocoon is very small and becomes a golden yellow color. In a vemicomposting bin, you will find cocoons on the surface of your worms’ bedding, or in the bedding. These cocoons are very resilient, and can even endure freezing temperatures and extreme moisture. The cocoon can last up to a year. The eggs will wait until they feel the environment is good for incubation. It will take around 3 to 4 weeks for the cocoon to incubate. When the eggs are ready to hatch, you will see the cocoon turn into a maroon color. Every cocoon has around four to six new baby worms. As soon as they are born, they will be ready to start consuming food scraps.

Baby worms will start off pretty small — about half an inch long and very thin. At this point, they still don’t have reproductive organs. It will take them about 2 to 3 months to fully mature into adults. Once they have these sexual organs, they can be considered “all grown up.” They will then start the reproductive stage.

Each worm can produce around two cocoons a week in ideal conditions. In a worm bin, worms won’t overproduce either, because their population will self-regulate. If you’re taking good care of your worms, each one can live up to 5 years. During this time, they will provide you with plenty of organic fertilizer.

To start vermicomposting, check out our Red Worms and European Night Crawlers. Uncle Jim’s Worm Farm is #1 when it comes to composting worms and supplies. Trust us for all your vermicomposting needs. Our worms are all born and raised on our rural Pennsylvania farm.