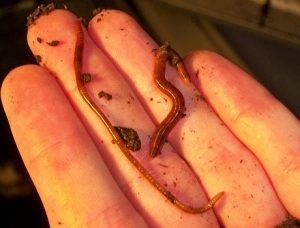 There aren’t too many outdoor activities that you can do (and do well) year round. Fishing is one of them that allows you such a great convenience. You can enjoy reeling in fish during the warm Spring and Summer  and continue to do so throughout the colder Winter months. Not bad eh? No matter what time of year it is, fishing with worms is always a possibility. And it’s great fun!

If you are an organic grower who has built up a more than ample supply of red worms and feel like you could stand to get rid of some, then why not take them out and try your luck at fishing this winter? After all, fish love worms don’t they? The Winter is definitely no exception!

Since fish live in water and worms dwell in the earth, some people wonder why fish like to eat worms in the first place. Truth is, worms aren’t confined to soil. In fact, many worms are considered aquatic animals rather than terrestrial animals. While worms are not the main source of food for fish, a wide variety of fish species encounter worms semi-often along river banks, lake bottoms and in streams. You can bet that most fish won’t pass up a chance to feed on a well-presented red worm.

Red worms are just the right size. Not too big, not too small. They’re neither intimidating or unmanageable. They’re a perfect bite size portion most any fish would be happy to sample. Trout typically feed on insects and small fish, so it may come as a surprise to them to encounter a big squiggly night crawler. Ask any fishing expert and he’ll tell you that the smaller worms often work best when fishing for your typical fish like trout, bass and perch. Large squiggly worms can be intimidating for a trout, for example, and the trout may or may not be very hungry in the first place. This is why the bite-size nature of the red worm is very appealing to fish! There’s little risk, and it’s just enough to keep them comfortable.

Red worms also wiggle just the right amount. Their movements aren’t too violent, but rather lure most fish. Since fish are naturally curious life forms, a piece of slimy bait like a red worm presents an irresistible attraction in front of them. Also, during the long cold winter months, the diet of marine animals is more limited than it is during the summer, which adds to the attractive nature of these red wigglers. “Hey, I haven’t seen one of these in a long time!”

I’m not saying that red worms are the best bait to try, but I’ve read stories where people have tried other forms of bait with no luck and after switching to a red worm they start getting good hits.

Keep up the good composting work and continue to build up that stash of red worms! There are all kinds of ways you can use spare red worms and ice-fishing just happens to be one of best. Trading a few worms for a few fish is a great trade-off when you think about it.

If you have ever tried fishing with worms, red worms in particular, then feel free to let us know how things went for you in the comments below. We’re no fishing experts here at Uncle Jim’s Worm Farm, but we do know a thing or two about our little red wigglers and their numerous uses.

One comment on “Using Red “Wigglers” Worms For Ice Fishing”