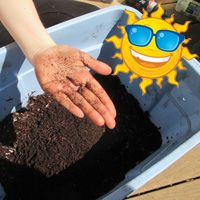 When the weather is hot, your vermicomposting system will heat up, too. Composting worms are living creatures who operate best in a specific temperature range. Let’s find out how you can keep them cool in the warm months of the year.

Our hearty composting worms are designed to handle a range of temperatures. Below 57 degrees Fahrenheit is too cold — worms slow down and run the risk of dying. We don’t know exactly the hottest temperatures they can endure, but we do know this: Too hot is not good.

“Not good” could mean they start to dry up and die. If a few expire, it’s not too big a deal. But you don’t want a bin full of unhappy and, eventually, dead worms.

The best things you can do are to try to keep the temperature down and keep the moisture level up. Also, control the worm population and minimize the vermin.

Keep the Temps Down

What happens if you stand in the sun all day? You will eventually over-heat. Staying out of the sun can significantly reduce the temperatures inside your worm bin. So, put your worm bin in the shade.

You might need to keep your vermicomposting bin under cover anyway due to rain. Depending on the design, certain composters such as our best-selling Worm Factory 360 let in too much water when it rains. Excess water makes the bedding too moist, drowns the worms, and promotes mold and mildew growth.

Additionally, you should allow the bedding to get deeper. Deeper bedding holds the cooler nighttime temperatures longer. This gives the worms a place to burrow if the top bedding is too toasty. You might concentrate your worms in fewer trays (in a multi-tray system), add more bedding, or let the worm castings build up more before harvesting it.

Keep the Moisture Up

You can easily reduce evaporation by keeping your composter lid on (if you have one). A moist sheet of newspapers placed over the top helps keep moisture in, too. The bedding should have the consistency of a wrung-out sponge. If it is dry, you can sprinkle a little water on top, but don’t go overboard with this.

When the weather is warm and there is the right amount of food and moisture, your worms will start having baby worms. First, there will be tiny brown spheres in the bin, and soon the little baby worms will hatch. Some worm owners adopt the policy of letting their worm bin population control itself. If there isn’t enough food or the bin is over-crowded, enough should die off to leave resources for the remaining worms. Other vermicompost enthusiasts like to jump in and remove some of the extra worms so they may live on. You can give them to friends (makes a great gift!), start another worm bin, or simply set some of them free.

Look Out for Vermin and Pests

Any place that is hot and moist allows life to thrive. Look at the rainforest! And Texas! They are teaming with life — crawling with life — because they are NICE AND HOT. You might find your worm bin takes on the characteristics of a rainforest by attracting bugs, vermin and even sprouted seeds. These problems are generally easy to address:

Your vermicomposting system might have come with a stick thermometer you can use to measure temperature. You can check it if you want, but using your common sense and the tips above will help keep your worm bin healthy in the summer.

11 comments on “Keep Worms Cool in the Hot Summer Months”