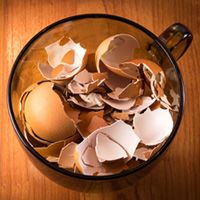 Households that compost kitchen scraps with worms typically use up a dozen or more eggs per week. It’s tempting to toss them right into the kitchen scrap bucket for composting. After all, eggshells are all-natural left-overs from food preparation. However, Uncle Jim has two suggestions for putting eggshells into your vermicomposting bin: crush them, and don’t over-do it!

There are several reasons to put eggshells in your worm bin. Eggshells provide calcium, which reduces acidity in the bin. This prevents high acid conditions that can harm your worms. Also, crushed eggshells provide grit to aid the worms’ digestion. And, it is believed that eggshells help worms in the reproductive process.

Eggshells are useful to vermicomposting bins because they help increase the pH of the entire bin contents to make it less acidic. This is not something the casual worm composting enthusiast needs to worry about too much. Our Red Wiggler composting worms are quite hearty and can survive without much attention. More serious hobbyists take the time to measure pH of the bin bedding. Throwing in a handful of crushed eggshells once in a while adds slow-release calcium, which helps keep the pH neutral.

The best technique for handling eggshells is to rinse them and let them air dry. After several dozen pile up, crush them with a mortar and pestle or any hard object. This should quickly result in powdered eggshells. Sprinkle them on top of your worm bin. You can choose to work them in to the bedding a bit.

Worms will swallow eggshell powder to add grit. Since Red Wigglers don’t have teeth, they need a bit of grit to help break down the food scraps. Eggshells are perfect for this.

As with anything, there is the concept of “too much of a good thing.” Some worm lovers get overly enthusiastic with the idea of collecting, crushing and adding eggshells to their worm bin.

A household of 4 or more can easily go through 2 or 3 dozen eggs per week. Households that purchase eggs from the grocery store or farmer’s market can control how many eggs come in. Homesteaders and farms that have laying hens have fluctuating egg production and can end up with a bumper crop of eggshells.

That many eggshells is more than your worm bin can handle. You’ll probably need to discard the majority of your eggshells. We recommend you add maybe ½ cup of eggshells no more than once per month. Watch and see how long it takes for the little white or brown eggshell dots to disappear from your bin. Don’t add more eggshells until the last batch of eggshells is invisible.

In a healthy worm bin, your worms will have babies. You might notice tiny, brown round dots. These are the eggs. Soon they hatch into small worms that quickly grow full-sized. The vermicomposting bin is self-regulating, in that the population will expand to the capacity of the bin size, available food, temperature and conditions. Eggshells are believed to be helpful for worm reproduction. If you have a lot of worms in your bin, you can choose to remove some worms. Start a new bin, give them to a neighbor, or use them for fishing. Otherwise, just let the population regulate itself.

So, don’t go too crazy with eggshells in your worm bin! Help out your worms by saving and crushing some eggshells to make the bin acidity heathy, help them digest their food, and assist in making new worms.