Blog / How are Worm Tea and Worm Leachate Different? 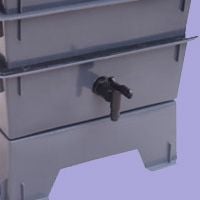 One question we hear quite often at Uncle Jim’s Worm Farm is, “What should I do with the liquid that drains off my worm bin? Is that worm tea?”

The spigot that lets the worm leachate drain is a valuable safety valve. If you leave it open, you’ll know pretty quickly if your worm bin is getting too wet because you’ll see brown liquid seeping out. It’s important to know if your worm bin gets too wet because the material in an overly wet worm bin tends to get compact and that means air can’t get in. When no air gets in, the material goes “anaerobic” (meaning “without oxygen”).

There are three reasons you don’t want your worm bin to get too wet and go anaerobic:

Since worm seepage only happens when your worm bin is too wet, and overly wet conditions lead to the production of bad bacteria, there is a good chance that the draining liquid will not benefit your plants.

What to Do With Extra Liquid

So what do you do with the worm leachate or seepage? If it smells bad, discard it. Pour it onto the driveway, flush it down the toilet, or tip it down the sink. If the odor is not bad, you can dilute it heavily with water, or run the bubbler in it (see below). However, there is a much better way to make liquid fertilizer for your plants.

Worm castings, because they are filled with the beneficial bacteria from the digestive system of the worm, are great stuff for your plants. You can use them as they are, of course, but you may also decide that you want to use some of the worm castings to create some genuine worm tea.

True worm tea is actually cultured or brewed, to help increase the number of good bacteria. Here’s what you’ll need to brew up a batch:

Fill the mesh bag (or stocking/sock substitute) with worm castings and close it up securely. This is your tea bag that you submerge in the 5-gallon bucket of water. Add the molasses and submerge the bubbler.

Let it bubble away for 24 hours, to make sure everything stays aerobic. After 24 hours have passed, remove the bubbler and mesh bag. Dilute the tea concentrate with another 5 gallons of water. Use immediately.

You can use the liquid to water special plants or spray it over your entire lawn and garden. (If you use a sprayer, be sure to strain the liquid well so no particles clog the nozzle.) The best time to spray is mid to late afternoon, after the heat of the day has passed.

Your plants will love this genuine worm tea!

25 comments on “How are Worm Tea and Worm Leachate Different?”