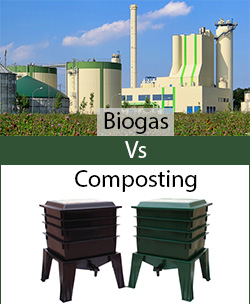 Both biogas and composting turn wasted organic material into something useful. Biogas makes methane, which is collected and burned to generate electricity. Composting makes organic fertilizer, which is used by gardeners, golf course managers and farmers to grow plants. Let’s dig into depth about their similarities and differences.

Both systems can work on any scale. Biogas is usually done on a large scale by a municipality or energy company. Some adventurous households tackle it themselves with DIY biogas generators. Composting can be done on a small scale in a household, for an entire apartment building or campus, or on a massive municipal basis.

Both processes need organic matter, such as kitchen scraps, left-over vegetables and fruits, wasted plant material from farming and the food processing industries, spoiled or unsold produce from grocery stores, and coffee grounds and uneaten fruit salads from coffee shops. This material needs to be separated and collected.

Most composting requires the inputs be low in oils. Animal products like dairy and meat can attract pests and stink up the process. Composting worms are often used to speed up the process, and they prefer vegetation.

Biogas can take pretty much any type of organic matter. It’s not as fussy because it uses a different process. It can use food waste, manure, municipal waste, agricultural waste, sewage, and plant material.

Note: Incinerating anything can produce electricity, but it also creates toxic gasses and toxic ash. Biogas is a superior method for handling organic waste.

Biogas can be compressed and shipped to another facility. Depending on their exact composition, they may be burned or oxidized; and they can produce electricity or heating fuel. The solids that are left behind from the process is called digestate. Digestate can be used as a soil conditioner, but it is not technically compost.

Composting produces finished compost for the garden, which is rich in nutrients, soil-friendly bacteria, and nitrogen. If worms are used, they produce worm castings, which are even better. These prized, chemical-free fertilizers are ideal for organic farming, lawns, vegetable gardens and indoor plants of all types. Just use it for growing starts, work it into the soil, use as a side dressing, or spray it.

Composting and biogas harness the power of organic matter. They use very different processes. Biogas requires far more machinery than composting, and its resulting output is flammable. On the other hand, mixing organic matter into the trash is a no-win scenario. Therefore, separating food waste from the trash helps the environment, whether the material is used to make organic compost or electricity.