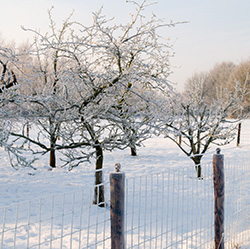 When the weather outside is frightful, you may worry about how composting worms survive the freezing weather. Winter temperatures can fall below freezing in most parts of the continental United States. What happens to composting worms in low temperatures? Is it important to prevent Red Worms or European Night Crawlers from freezing? How does temperature affect the composting process?

When It Is Cold

When temperatures plummet and stay low for a long time, everything starts to freeze. The lakes and even Niagara Falls develop a thick solid coating of ice. The ground becomes hard and almost impossible to dig into. Precipitation falls as snow, and the white flakes accumulate on all outdoor surfaces.

Human-made systems malfunction. Exposed water pipes freeze and burst. Even automobile windshield washer systems get clogged if contaminated with water. Ice crystals can wreak havoc if we are unprepared.

However, nature handled freezing temperatures for a long time before humans came along. Earthworms found ways to survive. Some worms dug deep or found warm places such as near hot springs. Worms also laid eggs and left the cocoons protected in the ground. Cocoons are designed to survive the winter.  Therefore, new worms hatched when the weather warmed up in the spring. This new population carried on the crucial task of breaking down organic material into fertilizer.

We learned to harness the power of composting when we began farming. Composting would have been a standard technique for improving the fertility of the land. For example, clay tablets referring to manure in agriculture were made by the Akkadian Empire in Mesopotamia more than 4,400 years ago.

In modern times, organic farmers still rely on composting to produce natural fertilizer. We have found that concentrating worms in a composting bin makes the waste vegetation break down faster. This is called “vermicomposting.” Fast breakdown is important to everyone, especially urban and suburban households. City folk live in tighter quarters, and do not have much outdoor space for composting. Thus, they turn to composting outdoors, on a patio, or indoors, using worms.

A traditional outdoor vermicomposter is usually confined to a bin or barrel. The composting worms have nowhere else to go. As their caregivers, we are obligated to give some thought to their care. Here are the options:

Leaving composting worms outdoors might sound harsh. If you are emotionally attached to this specific generation of worms, move them inside. However, Mother Nature set things up so the worm population will carry on.

The worms will try to take care of themselves in the confines of the bin. They will naturally migrate to the warmest part of the bin. This will usually be the center, down deep. If you do not see worms on top, do not worry. They likely dug down looking for protection. Leave them be. Continue to feed them by burying the food under a small amount of bedding. The scraps will continue to break down, just more slowly. Also, colder worms will eat less. The composting process itself generates some heat.

An established, healthy worm bin will contain worm eggs inside of cocoons. They are dark and shaped like lemons, about the size of a grain of rice. Even if you cannot see them, have faith in your worms! If the eggs are there, you will see little baby worms when the weather is consistently warm. They will grow into full-sized composting worms. And they will dutifully break down kitchen scraps and waste vegetation.

A large amount of scraps may have accumulated in your worm bin or freezer over the winter. Spring is when you need the most finished compost for your garden. The worm population might not bounce back in time. Or, if there was mass die-off and no babies, the worms might not recover. If necessary, purchase a bag of composting worms from Uncle Jim’s Worm Farm. Add them to the top of the composter and they will dig their way down.

If the weather is below freezing when you order worms, they could freeze in your mailbox. Just choose “Yes please” to the question “Hold your worms at your local post office?” on the product page.

Don’t let cold weather stop you from vermicomposting. Composting with worms diverts food and garden waste out of landfills. The resulting fertilizer is excellent nourishment for your garden and indoor plants. Got questions about vermicomposting? Connect with Uncle Jim’s Worm Farm on social media, and browse our blog.