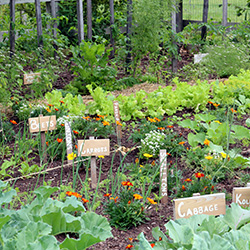 In the hot summer weather, your composting worms are at risk of getting overheated and dried out. They may even die. That’s because worms are unable to sweat. Outdoors in nature, worms beat the heat by burrowing deep into the soil. But your composting worms don’t have that option. They live in an artificial environment, the composting bin. As a master of their universe, you must ensure they stay healthy. This article is a guide as to how to prevent your worms from suffering in the summer heat.

Setting up Bedding for Summer

Worms get moisture from the bedding. Since worms breathe through their skin, make sure the bedding is moist, like a wrung-out sponge. Should you find the vermicomposting bin too dry, add a little dechlorinated water. Add just a little water at a time because you don’t want to drown your worms. Test the moisture before pouring in any more.

Another way to set up summer bedding is to make it deeper. Not only does that retain the cooler nighttime temperature, but it also gives your worms more burrowing space.

Checklist for Summer in the Composting Bin

A Few Notes of Caution

Heat and humidity bring out the bugs. Cut food scraps into smaller pieces, bury them, and keep the composting bin lid on. If ants set up a nursery, take the lid off for a while and they will move. Don’t worry if you see a few bugs inside, because they help break down food scraps.

The lid also deters vermin. A simple reminder that your worms don’t eat meat, bones, and oils. But vermin like raccoons and their friends certainly do. To keep them from getting inside, secure the lid with a bungee cord or bricks.

If you see sprouts growing in the bin, pull them out.

On the Positive Side

Besides gifting you with natural organic compost, your worms will leave additional gifts in the summertime: baby worms. At first, they will be tiny eggs — brown spherical specks in the bin. Soon after, they will hatch. Since composting worms self-regulate their population, there’s not much more to do. Should you have too many worms, give surplus worms to neighbors who want to start their own composting bin.

If too many of your worms are killed by the summer heat, you can always purchase more worms at Uncle Jim’s Worm Farm.

Uncle Jim’s Worm Farm is the top seller of composting worms in America. Our worms are born and bred in Pennsylvania at our rural farm. Check out our live Red Worms, which are excellent for composting. Our live European Night Crawlers are known for composting, aeration and fishing bait. We also sell an array of composting bins and accessories.

9 comments on “Keeping Composting Worms Cool in the Summer”