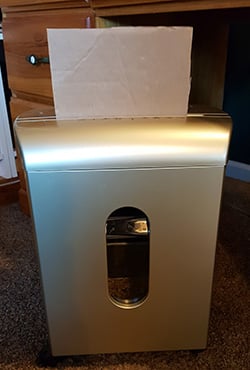 Cardboard is readily available, but can you feed cardboard to composting worms? Vermicomposting enthusiasts turn trash into valuable organic compost with the help of Red Worms. Obviously, fruit and vegetable scraps are an ideal food to bury in the composting bin. However, most of our household consumables come packaged in cardboard. Can you compost cardboard? Which types of cardboard are best for worms? Can worms live exclusively on cardboard?

When you start a composting bin, you need material for the worms to live in. This is called “bedding.” Bedding is typically made from a mixture of coconut coir, pure peat moss, shredded black ink newspaper, partially-decomposed leaves, and/or small amounts of untreated wood chips. Additionally, certain types of cardboard make good bedding.

Bedding needs to contain cellulose. Cellulose gives structure to plants. When worms eat cellulose, they acquire some nutrition. However, worms will also need regular feedings of fruit and vegetable scraps to stay healthy.

The best bedding retains the right amount of moisture. Ideal bedding should feel like a wrung-out sponge when squeezed. The pH of bedding should be neutral — not alkaline and not acidic. And it should be light and fluffy enough to allow air flow and worm movement. 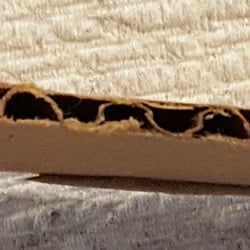 Cardboard is made from trees and is therefore very high in cellulose. Only certain types of cardboard are good for worm bins.

Cardboard that is highly processed, bleached white, coated, shiny, or saturated with colored ink does not make good bedding. The chemicals can be toxic to the worms. Plastic-like coatings will never break down in a worm bin.

Brown corrugated cardboard makes a good worm bedding ingredient. Corrugated cardboard is structured like a sandwich: two outer layers called “liners,” with a “flute” made from recycled paper in the middle. This flute crushes under pressure, thus cushioning the box contents. The flute also provides the fluffiness needed in worm bins. Make sure the corrugated cardboard is not colored, treated, waxed, covered with a plastic layer, or otherwise processed.

Large sheets of brown corrugated cardboard will take a long time to break down in a worm bin. They hinder worm movement and prevent proper drainage. You need to prepare the cardboard first.

How to Prepare Brown Cardboard for Worms

Brown corrugated cardboard needs to be cut into small pieces before adding it to a worm composting bin. To do this: 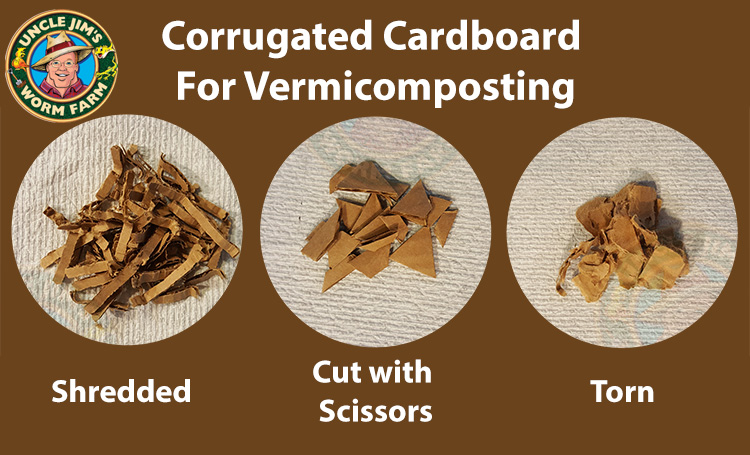 When preparing bedding for a new vermicomposting bin, mix shredded corrugated cardboard with one or two other bedding ingredients. See a list in paragraph 2.

Corrugated cardboard can also serve as food for the worms. Mix it into their kitchen scraps occasionally. However, composting worms cannot live exclusively on cardboard.

Can I Feed Cardboard to Worms Exclusively?

No.  Red worms need a varied diet. In the wild, they would munch on whatever food they could find. Corrugated cardboard is an utterly anemic diet that would make anyone sick!

Also, cardboard has a very high carbon-to-nitrogen ratio of 350:1. This is a lot of “brown” and no “green.” Ideal food for a vermicomposting bin has a ratio between 20:1 and 30:1. Putting too many high-carbon substances in the bin slows down composting.

Corrugated cardboard is easy to get. It makes an excellent bedding ingredient. Also, you can mix it into the worm’s food once in a while.

Advanced Tip: Cardboard that has food scraps on it is perfect! The bacteria and fungi have already started to grow on the stains, initiating the breakdown process. Worms eat the microorganisms that are growing on spoiling vegetation. So they love it!

Uncle Jim’s Worm Farm is the #1 supplier of composting worms in the USA. Browse our website for composters, live worms, and composting tips.

16 comments on “Can I Feed Cardboard to Composting Worms?”