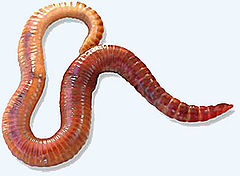 Worms are interesting creatures and, for that reason, are sometimes misunderstood. After all, they do look and behave differently than the majority of other animals we are accustomed to hearing about. Uncle Jim’s Worm Farm handles worms every day so they’re pretty normal to us!

For example, did you know that worms eat dirt? Since worms don’t have teeth, they eat small amount of dirt every once in a while to help break down and digest their food! But they don’t gain any nutrients from eating dirt.

There are many more fascinating things to know about worms. Here are some answers to commonly asked questions about them. You might be surprised at some of the responses!

Do Worms Have Eyes?

Worms do not have eyes, however, they do have receptor cells that let them know when it is light or dark. They use similar receptor cells to find their way around by detecting vibrations in the ground.

Do Worms Have Mouths?

Worms do have mouths. They use their mouths to ingest dirt and food particles found in the soil they are tunneling through. These food particles turn into valuable compost that fertilizes the ground they dwell in.

Since worms do not have teeth, they cannot bite you. Most people find that holding a worm is fun and ticklish. You should not be afraid to hold a worm.

Worms form cocoons that look like lemon-shaped incubators where tiny embryonic worms develop. These tiny worms later emerge from the cocoon as fully formed worms. Worms do not give birth to live baby worms.

Do Worms Have Brains?

This is a debated topic that has no real authoritative answer, but the general consensus is yes. Worms do have brains, although they are very small and simple. It is believed by many that the sole function of the worm’s brain is to direct it’s body movement in response to light and that if the brain of a worm was removed, there would be hardly any noticeable changes in the worm’s behavior.

Worms breathe through their skin, which helps explain why worms are slimy. Moist skin helps worms breathe more easily. This is why it is common to see worms surface after a rain storm. They love moisture. If worms dry out, they will die.

This is a tough question that bewilders even scientists. It really depends on the definitions of sleep. If sleep is defined as a period of inactivity, then worms indeed sleep. If sleep is defined as a loss of consciousness, typical brain wave patterns consistent with “sleep” and closed eyes (which worms do not have), then worms do not sleep. So Yes and No. Welcome to the wonderful world of science.

While there are varying definitions of the word pain, and while worms do not suffer the same way as we vertebrates suffer, worms do feel negative stimuli. Perception of pain is important to the survival of any animal. So in short, yes, worms feel pain.

Please share your thoughts and opinions on our Facebook page! We always look forward to hearing from you.