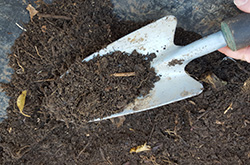 For some worm composters, harvesting worm castings can be a very tasking thing to do. You’re going to have to try your hand at separating the castings from the worms, at a thorough manner. But then again, a lot of worm bins make harvesting easier to do, but there are also some that aren’t as conducive.

You’ll know that your worm bin has been filled-up with castings as soon as you see rich, earthy soil stuff in it. It’s also easier to harvest these worm castings if you have those stackable units at home. You’ll only have to take out the bottom tray, and empty it afterwards (you can store the castings inside another container).

But if you want to try other common approaches to harvesting worm poop, then you can try the following tips:

Tip 1: Since red wiggler worms are sensitive to light, you can separate them from their castings by simply shunning some light on them (you can probably use a lamp or flashlight for this); and they will instantly burrow back into the bottom part of the soil. So, as soon as the worms disappear, you can then scan through some worm manure that has been casted aside. Scoop from the top pile all the way to the bottom, using either a shovel or your hands. And if you happen to scoop in some worms, you can just put them back right in their bin. Plus, you won’t have to worry about the smell or the unpleasant feel of the worm manure, as these form into a rich black soil, that has an earthy smell to it.

Tip 2: If you’re really not much of a reaper, and is willing to spend some money, then you can always buy those professional worm harvester machines (probably costs at around $1000).

Tip 3: You can also try constructing your own screening trays, using mesh as the material (attached on wood boards). You’ll only need to shake the bedding materials, into a separate container for where to catch the castings remains.

Tip 4: One popular method to harvesting worm manure (can also come from castings of european nightcrawlers) is to place everything to one side of the worm bin. Now if there’s still food in the bin that haven’t been completely consumed, then you should shove this to the middle part of the bin. You’ll have to add in some more food to attract the worms (they’ll start relocating to this side soon after). You’ll be able to see results after about two weeks. And then you’ll be able to harvest some castings without having to deal with any worms along the way. But after reaping the castings, make sure to replace the worm bedding.

Tip 5: You can also manually do the harvesting by hand. But it’s really not that helpful to the worms because every time that you physically touch them, their skin dries up. You should know that worms need to be moist, as they breathe from their skin. Harvesting worm castings can be tedious but you can always consider these useful tips when it’s time to do some reaping. It’ll also take a lot of patience and determination to do this process properly.