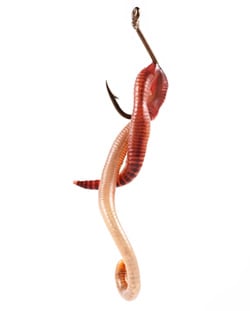 As the weather begins to warm, people are getting their fishing poles ready for more comfortable fishing outings. And if there’s one way to enjoy fishing comfortably, it’s with the the classic worm and bobber.

Fishing with a worm and bobber gives you options. You can fish while you…
…but you won’t get very far if you don’t know how to properly hook a worm.
Have you ever cast your line out into the water after baiting your hook and your line goes one way and your bait goes another? Bait fishing does require a little bit of technique if you want good results and make the most of your time.

How To Properly Bait A Hook Using A Worm

There are several schools of thought when it comes down to it, but in general, here are the guidelines most fishermen use while bait fishing. Following these tips will help you catch more fish, making your comfortable fishing outings that much more enjoyable.
There you have it. If you have a special way of hooking a worm, be sure to let us know in the comments below!
Uncle Jim’s Worm Farm is a vermicomposting company specializing in red wigglers, the world’s best composters! Check out our worm selection today! The above image is not our own.

4 comments on “Best Way To Hook A Worm”