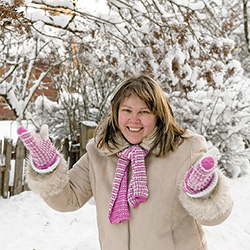 Worms are among the oldest organisms on earth. How have Red Worms made it through freezing winters for untold millennia? They didn’t, unless they found a warm spot. They laid eggs and let the next generation of worms repopulate the area.

Red Worm eggs are tiny – the size of grape seeds. They are viable for up to one year. If the adult worms lay eggs in the fall, the eggs will wait until the weather warms up in the spring. Even though the adults may die, new babies should hatch and take their place.

If worms do not appear several weeks into the warm weather, you might have to order more worms from Uncle Jim’s Worm Farm. We recommend Red Worms for composting.

Continue to place kitchen scraps in the bin. They will break down slowly. Activity will speed up in the spring.

Obviously, if your worm bin has a lid, keep it on. You can fashion a covering from a tarp. Or see our article on worm blankets.

You can try to trap more heat by insulating your composting bin. Place hay bales on the outside of the bin. Or, attach board insulation foam on the outside. Be careful to not block the bin’s drainage or air holes.

The earth is an excellent insulator. Dig a hole at least one foot deep and place the worm bin inside. You can leave it in the hole year-round. The worms will migrate toward the bottom of the bin when the temperature drops.

Option 4: Move the Bin to a Warmer Place

Your worms could stand a chance on your porch or in the garage. If these areas are warmer than outdoors, they might work. Or, see if you have a waste heat source, such as a dryer vent or central heating exhaust vent. Your worms might get regular blasts of heat if you move the bin nearby.

Best to avoid direct sunlight, as the worms could get too hot.

If you are a techie, try seed tray warming mats with a thermostat. Depending on your composting bin’s construction, you may be able to place the mats on top of the worm bin. Attach the cool side of the mat to a board that covers the bin. Place the bin/board hot side down, toward the worm bedding. Use caution when running power cables outside; you may wish to move the bin under shelter, near the electrical outlet. An incandescent or heat lamp might also be useful heat sources.

Just like humans, worms become uncomfortable when they are too cold. Why not bring them inside?

Some composting worms live indoors year-round. Some are moved indoors just for the fall and winter.

You can choose to bring some of the worms indoors. Attract them by putting mushy kitchen scraps in one part of the bin. In a day or two, the worms will congregate there. Scoop them out and place them in an indoor bin with bedding. See our article about indoor composting.

Do not worry too much about the worms who remain in the outdoor bin. Hopefully, they will lay eggs or find a warm place in their bin.

About: Uncle Jim’s Worm Farm is the #1 supplier of composting worms in the United States. We offer live worms, mealworms, indoor composters, outdoor composters, and supplies.