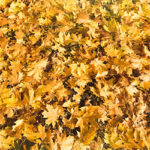 The leaves are changing colors, which means it’s the time of year to get your vermicomposting bin ready for the colder season. Even though it’s cold outside, you can still compost your kitchen scraps using worms. The worms will produce free, all-natural fertilizer. If you are from a warmer climate that doesn’t dip below 57°F, your composting worms will probably not die, but they will slow down due to lower temperatures.

However, if you live in a colder area, then you may want to take precautions so your worms will not die.

The most efficient way to keep your worms safe is by bringing them inside. Our tray-based composters can be used both inside and outside. To ensure their safety, put them in an area of the house that stays warm. It’s easier to keep them close for feeding, like in the kitchen or a closet, instead of venturing outdoors. Also, there is no need to worry about various insects, vermin, stench, and mildew, as these will only happen if you’re not adequately taking care of your worms.

Harvest a bit of the compost if you find the bin is too heavy to move.

If your bin is too big to move, having a smaller one for indoor use is handy. Carefully collect the worms and a good amount of bedding and transfer them into a smaller vermicomposting bin.

Allow the earth to serve as your biological insulator! If you are using a tote or plastic composting bin, you can always dig a hole in the ground and bury the bottom half of the bin. Harvest a bit of the completed compost if the bin is too full. We recommend leaving a few feet of bedding to keep your worms warm. The worms will move towards the bottom of the bin in order to stay warm.

Although they won’t eat as much during the winter, remember to feed your worms! Make sure you position the food deep in the bin so the worms won’t have to leave their warmth.

Physically insulating your vermicomposting bin is another option. Composting naturally produces heat, so insulation will help keep the heat inside. We suggest using shredded newspaper, straw/hay, or Styrofoam. Remember not to cover any air or drainage holes. Leaving the lid on the bin also traps some heat inside.

Consider relocating the bin to a covered area, or using a heating lamp or pad to keep your worms warm—just don’t start a fire! Keep the bin out of direct sunlight. Even though it’s colder outside, the worms could become too hot.

Leaving your bin without protection ensures the death of your worms. They will most likely lay eggs beforehand, and these eggs will not suffer through the cold. You might have baby worms when it gets warm again.

However, if this is not the case, an order of live Red Composting Worm Mix from Uncle Jim’s Worm Farm will supply you new worms to compost with. Uncle Jim’s worms are born and raised in rural Pennsylvania.

What else is great for composting? Uncle Jim’s Worm Farm live European Night Crawlers will do the trick, and they are also fantastic for aerating the soil and using as fish bait!

Need more composting materials? Look through our composting bins and various supplies in order to fill all your vermicomposting needs.