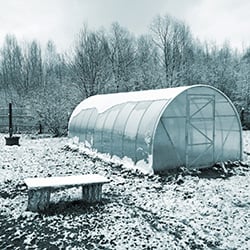 Composting worms help break down food scraps, but how do they survive the cold winter? Any vermicomposting bin set up in a northern state is likely to freeze. Will all the worms die? Should you try to save them? If the worms die, will there still be worm castings for fertilizer in the Spring? Should you bring them indoors?

Worms survived for a long time before humans came along. In fact, earthworms are some of the oldest creatures on the planet!

Worms in a worm bin are essentially domesticated. Their behavior remains instinctive. However, putting them into a worm bin means they are under our care. We take responsibility for their well-being. You might have 500 worms in a composting bin made from a tote, or a worm farm with millions of composting worms. Either way, you manage their surroundings.

However, unlike most pets, worms can quickly replenish themselves. Left in a frozen worm bin, many or all will die. If the bin was established well before the cold set in, the worms likely laid eggs. These eggs can survive up to a year in almost any weather. Even if all the worms freeze, new babies should hatch once the weather warms up.

The worm’s natural resilience takes the pressure off the worm bin owner. You can just let nature take its course and do nothing to your outdoor worm bin. Let it freeze. Let it thaw. In the Spring, check for worm eggs, which look like tiny, brown, lemon-shaped spheres. Also, you might see baby worms. Feed them and soon enough, your bin should bounce back.

Worst case, if enough babies do not appear, you can order a bag of composting worms from Uncle Jim’s Worm Farm. Baby worms have a smaller appetite than adults. Therefore, a fresh bag of worms instantly boosts the population of hungry, mature worms. They will quickly digest your kitchen scraps and produce worm castings to put fertilize your garden.

If you decide to take action, you need to preserve or provide some heat. Keeping at least part of the worm bin above freezing is helpful.

If your home is warm enough for you, it is warm enough for your worms. You could move a small bin indoors. For example, a tray-based composter will have most of the worms in the top “working” trays. Move those trays and the base inside. Try under the kitchen sink, or in the laundry room, the basement, or a closet. An indoor worm bin is convenient. No more putting on boots and trudging through the snow! In the Spring, you can move the bin back outside.

Some folks prefer to use a large worm composting bin outdoors and set up a smaller bin inside for the winter. Purchase a handy tray-based composter and dig up some worms from your outdoor composter. Feed them all winter. In the Spring, harvest the worm castings and put the worms back in the outdoor bin.

Check temperatures in your garage or shed. A partially-heated building is better than outdoors in the elements. You should also consider insulating and maybe adding heat (see precautions below).

Worm bins naturally generate a small amount of heat. The process of breaking down organic matter is warming. The center of the bin will usually be the warmest. Worms will migrate there if they are cold.
Insulating the bin helps trap heat in the bedding. Hay bales, straw, scrap carpet, Styrofoam, bubble wrap, insulating foam, or even blankets make good insulators. Put insulation around the outside of the worm bin and secure in place. A couple of bungee cords or lengths of rope could come in handy here. Be careful not to block any air or drainage holes.

Adding heat to the bedding could be a fire hazard if you are not careful. Some worm composting enthusiasts use a seed tray warming mats or lamp to warm up the bin. Keep electrical cords and heat away from combustibles and moisture.

Do What Works for You

Mull over your options and decide what is best for your worms. If you maintain your worm bin, you will have plenty of organic fertilizer to use on your plants.

Check out Uncle Jim’s worm bins, composting worms, meal worms, and supplies. We have been raising worms for more than 40 years. We are the #1 supplier of live composting worms in the United States.

21 comments on “How Do Composting Worms Survive the Cold Winter?”